SEOUL, May 23 (Yonhap) -- The wage gap between male and female workers at large firms here widened in the first quarter from a year earlier, data showed Thursday.

Women working for 202 major listed companies were paid an average 15.37 million won (US$12,910) in the January-March period, or 63.5 percent of the median pay of 24.2 million won for male employees, according to the data by Yonhap Infomax, the financial news and information arm of Yonhap News Agency.

It was slightly lower than the 64.6 percent ratio recorded during the same period a year earlier.

Yonhap Infomax analyzed the firms' quarterly reports to obtain the data. It didn't provide the reason for the widened difference.

GS Group posted the biggest pay gap, with the ratio coming to 38.4 percent, followed by KT Group with 46.88 percent and Hyosung Group with 46.93 percent.

The data also showed the pay gap between the companies' executives and rank-and-file employees narrowed slightly in the first quarter, but the difference remained big.

The average pay for registered directors sank 17.5 percent on-year to about 230 million in the first quarter, while that for workers climbed 6.7 percent to 20.1 million won. The wage gap narrowed to around 11 times this year from 14 times a year earlier. 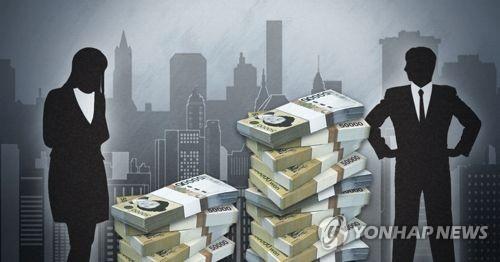