SEOUL, May 24 (Yonhap) -- South Korea's Foreign Minister Kang Kyung-wha has stressed the importance of close communication with Japan to address a simmering row over Tokyo's wartime forced labor during her talks with Japan's top diplomat Taro Kono in Paris, her ministry said Friday.

The two top diplomats met on the margins of the Ministerial Council Meeting of the Organization for Economic Cooperation and Development, where tensions were palpable over the issue stemming from Japan's 1910-45 colonization of the peninsula.

"There are difficult issues between the two countries, but it is important to closely communicate whenever opportunities arise," Kang said in her opening remarks.

Noting that the new era of Reiwa, or beautiful harmony, opened with the recent enthronement of Emperor Naruhito, Kang voiced hope that Seoul-Tokyo relations will evolve in a forward-looking manner.

Kono took issue with remarks by Kim In-chul, spokesman of Seoul's foreign ministry, that there would be "no problems" if the Japanese companies in question comply with court orders to remunerate the victims.

Kim made the remarks in reference to Kono's recent call for South Korean President Moon Jae-in to "responsibly" address the forced labor issue.

"I think that is a very serious statement that does not understand the gravity of this matter," Kono said.

"I urge (South Korea) to share the understanding that such remarks will make Japan-South Korea relations very difficult," he added.

Kang stressed to Japan the importance of "prudent" words and actions regarding the thorny issue, her office said.

"Minister Kang said that given the need for the diplomatic authorities of the two countries to wisely address the issue to avoid negatively affecting the entirety of the South Korea-Japan relations, she highlighted the need for Japan to work together to heal the pains and scars of the victims," her ministry said in a press release. 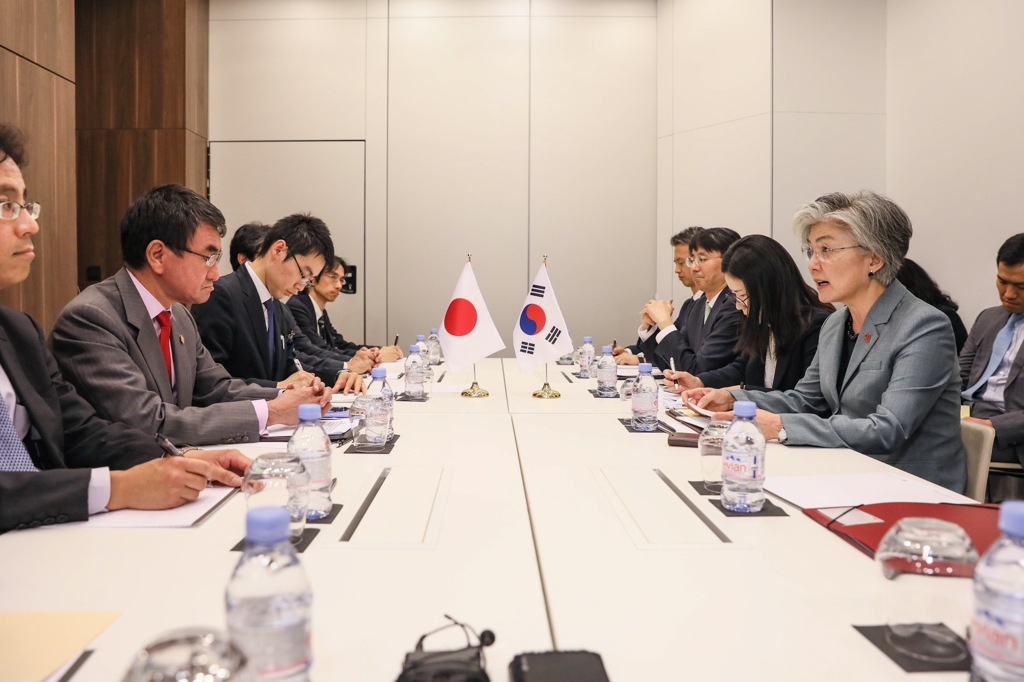 The top court has recognized victims' rights to claim damages, but Tokyo maintains that all reparation issues stemming from its colonial rule were settled under a 1965 government-to-government accord that normalized bilateral relations.

Tensions flared anew Monday as Japan requested the formation of an arbitration panel involving a third-country member to address the forced labor issue based on dispute settlement procedures enshrined in the normalization accord.

In January, Tokyo called for bilateral diplomatic talks over the issue, also based on the accord. But Seoul has remained unresponsive, refusing to weigh in on civil litigation involving private citizens and Japanese firms.

The accord stipulates that the two sides are to settle any dispute related to the accord primarily through diplomatic channels. If they fail to settle it, the case can then be referred to an arbitration panel involving a third-country member agreed on by the two sides.

Should the arbitration panel fail to hammer out a solution, Japan could bring the case to the International Court of Justice.

The forced labor issue aside, Kang and Kono discussed last month's ruling by the World Trade Organization (WTO) in favor of South Korea's import restrictions on Japanese seafood imposed in the wake of the 2011 Fukushima nuclear meltdown.

Kang also underscored the importance of cultural and people-to-people exchanges between the neighbors, and Kono shared the view, her ministry said.

Kang and Kono last held bilateral talks on the sidelines of a security forum in Germany in February.