SEJONG, May 23 (Yonhap) -- South Korea's finance minister said Thursday that the government will take steps to stabilize the foreign exchange market in case of increased volatility.

"We will make efforts to stabilize the market if instability occurs in the foreign exchange market due to an excessive one-sided movement caused by factors other than actual demand," Hong Nam-ki, the minister of economy and finance, said in a meeting with reporters. "We are always ready for it."

Hong's comments hint at intervention in the foreign exchange market to stem the decline of the local currency against the U.S. dollar. 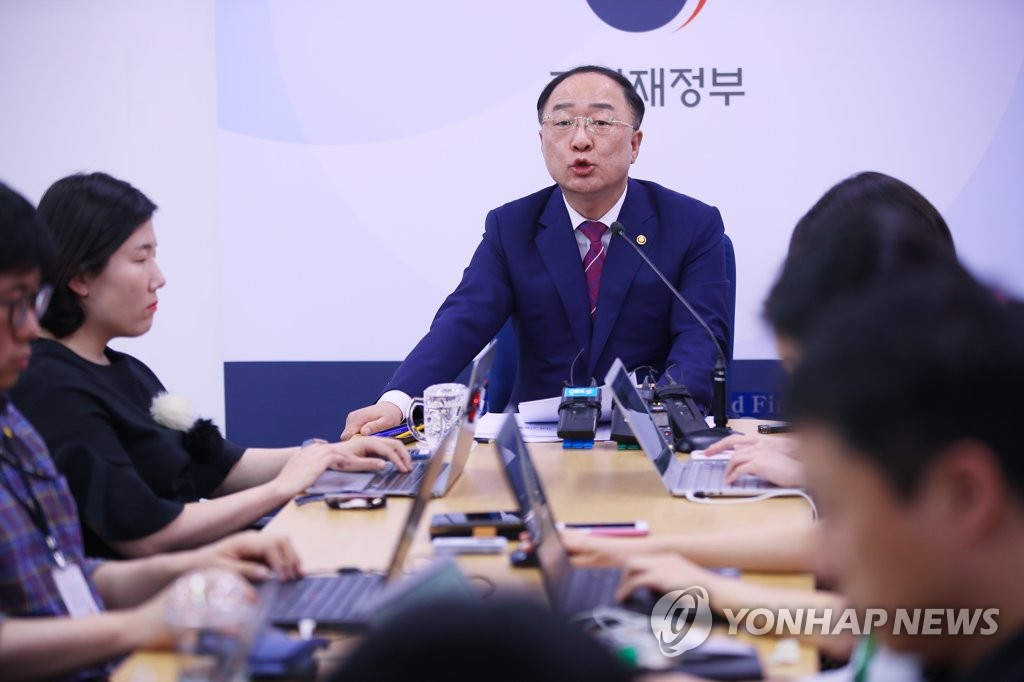 The Korean won has lost some 6 percent against the greenback this year, closing at 1,189.20 won on Thursday.

Volatility has recently increased amid the escalating trade frictions between the United States and China and an unexpected retreat in Asia's fourth-largest economy.

The U.S. has raised its import tariffs to 25 percent from 10 percent on $200 billion worth of Chinese products. In a tit-for-tat response, China has announced that it will levy higher tariffs on $60 billion worth of U.S. goods.

Also, the economy contracted an estimated 0.3 percent in the first quarter of the year from three months earlier, marking the worst performance in a decade.

Hong also said the government has no plans for a redenomination, noting the government will focus on revitalizing the slowing economy instead of causing unnecessary social confusion and friction.

His comments came three days after Bank of Korea Gov. Lee Ju-yeol dismissed reports of a possible currency redenomination, saying the bank has neither reviewed the possibility nor has any plans to push for such a move.

Redenomination refers to adjusting the nominal value of a currency. Currently, the Korean won is higher than other currencies in terms of face value. South Korea's highest denomination bill is 50,000 won, which is worth $42.

Hong said the government-led tripartite commission on the minimum wage should take into account economic impact and other issues when deciding next year's minimum wage.

Critics claim the minimum wage hikes have increased the burdens on businesses, especially microbusiness owners and the self-employed.

Last month, the South Korean government proposed the extra budget, but no progress has been made yet due to a political standoff between rival parties.

Also Thursday, Hong said the government will mobilize its policy tools available to address the issue of income distribution, though he said the issue won't be solved in a short period of time.

The average household earned 4.82 million won per month in the January-March period, up 1.3 percent from the previous year, according to the data compiled by Statistics Korea.

The monthly average income of the bottom 20 percent income bracket dropped 2.5 percent on-year to 1.25 million won, compared with a 17.7 percent on-year decline in the fourth quarter of 2018.

In contrast, households in the upper 20 percent income range earned 9.92 million won during the first quarter, down 2.2 percent from a year earlier.

Consequently, the country's distribution ratio for disposable income -- a key barometer of earnings equality -- reached 5.80, compared with 5.95 in the same period of last year.

The first-quarter distribution ratio fell for the first time since 2015, according to the Ministry of Economy and Finance.

Hong said he will meet with top executives of petrochemical companies in coming weeks to help address their difficulties and ask them to boost their investments.