SEOUL, May 23 (Yonhap) -- South Korea and Japan participated in a U.S.-led naval exercise on Thursday in the first joint maneuvers between the two neighboring countries since their military ties were strained seriously over a radar row, officials said.

The United States asked the two allies to take part in the inaugural Pacific Vanguard exercise, which kicked off in waters off the Pacific island of Guam and the Marianas Island Range Complex for a five-day run, in an apparent effort to help mend ties between Seoul and Tokyo, they said.

The exercise, which brought together more than 3,000 sailors from four Indo-Pacific nations, including Australia, marked the first time that South Korea and Japan took part in joint drills since their military ties soured in December last year over a military radar row.

"The U.S. called for their joint participation as part of mediation efforts," a Seoul official said, adding that it signals the restoration of bilateral relations and military exchanges in earnest.

The radar row centers on Japan's allegations that a South Korean destroyer locked targeting radar on a Japanese surveillance plane. South Korea has flatly rejected the claim, saying the plane needlessly approached the ship, which was on a normal rescue mission.

Defense ministers of the two neighbors are also likely to meet early next month on the sidelines of an annual forum known as the Shangri-La Dialogue. Top-level defense talks between Seoul and Tokyo were last held in October 2018.

According to U.S. 7th Fleet, the combined exercise focuses on a wide range of naval competencies, such as live-fire exercises, defensive counter-air operations, anti-submarine warfare and replenishment at sea, which aim to "sharpen their skills and strengthen their cooperation at sea."

"This exercise advances the integration of our forces, and enables an effective collaborative response to a range of events that might occur in the region," he added. 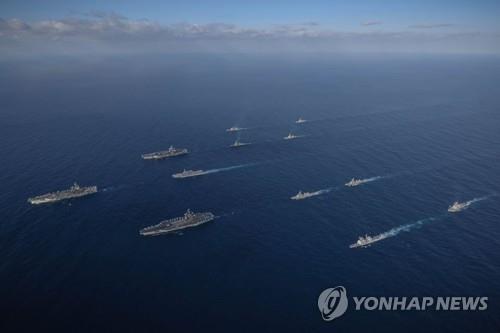