SEOUL, May 24 (Yonhap) -- South Korea plans to launch a new civilian-military exercise next week to better brace for various contingencies, the defense and interior ministries said Friday, the latest in a series of reorganizations of defense drills to support peace efforts with North Korea.

The inaugural Ulchi Taegeuk exercise will take place from May 27-30 involving around 480,000 civilians, government officials and armed service members from about 4,000 government and related agencies, the ministries said.

It is meant to "strengthen the country's crisis management capabilities in dealing with various safety and security threats, including terrorist attacks and large-scale natural disasters, as well as to ensure a readiness posture," the ministries noted.

The new type of exercise will combine two existing programs: the Taegeuk command post exercise led by the South Korean military and the government's Ulchi exercise, which was part of the South Korea-U.S. Ulchi Freedom Guardian (UFG) exercise.

"As for an envisioned S. Korea-U.S. exercise in the second half of the year as an alternative to the 'Freedom Guardian' part of the UFG, discussions are underway between the allies on its scope and timing," a defense ministry official said.

Last year, Seoul and Washington announced the decision to temporarily suspend the UFG exercise, and the Seoul government said it would create a new one to support the peace-building efforts on the Korean Peninsula.

North Korea has long bashed the allies for their joint drills, calling them rehearsals for invasion, while Seoul and Washington have argued that their drills are defensive in nature.

The Ulchi exercise was created in the wake of North Korean commandos' botched attempt in 1968 to infiltrate Seoul's presidential office Cheong Wa Dae and assassinate then President Park Chung-hee. It focused on various national crisis scenarios.

UFG dates back to 1976, when the Ulchi exercise was combined with the U.S-led U.N. Command's Focus Lens exercise. It was initially called the Ulchi Focus Lens and renamed the Ulchi Freedom Guardian in 2008.

The Taegeuk exercise was launched after South Korea retook peacetime operational control from the United States in 1994. It was initially called the Aprok River exercise and got the current name in 2004. Led by the Joint Chiefs of Staff, it focused on enhancing theater-level operation capabilities. 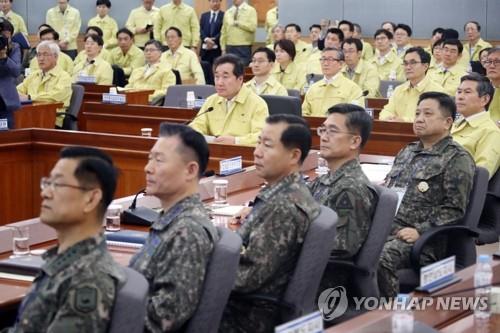