SEOUL, May 24 (Yonhap) -- A local court was to hold a hearing on Friday to decide whether to issue an arrest warrant for the head of contract drug manufacturer Samsung BioLogics on charges of abetting destruction of evidence in the company's accounting scandal.

Kim Tae-han, the first CEO-level suspect grilled by prosecutors in the escalating accounting scandal implicating the Samsung Group company and its affiliate, Samsung Bioepis, was to attend the hearing at the Seoul Central District Court in the morning.

Kim is accused of masterminding manipulation and destruction of accounting data and internal documents related to suspected window dressing committed in 2015 to inflate the valuation of Samsung BioLogics ahead of its initial public offering in 2016. 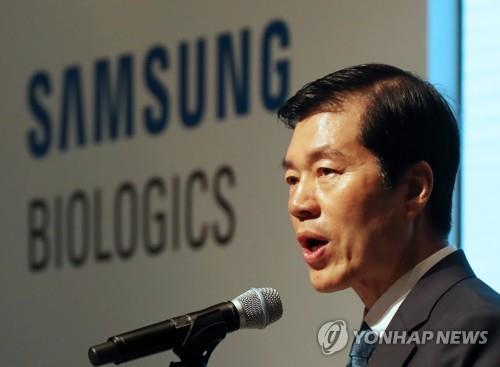 Two senior executive vice presidents of Samsung Electronics, surnamed Kim and Park, who were previously questioned by prosecutors on the same charge as Kim's, were also to attend the same pre-trial detention hearing.

Earlier this month, two lower-ranking executives of Samsung Electronics, who hold the title of senior vice president, were arrested on charges of trying to conceal and manipulate accounting documents and internal reports of Samsung BioLogics and Samsung Bioepis last summer. Samsung Electronics is believed to be functioning as a control tower for other Samsung Group companies.

Last week, a Samsung Bioepis executive surnamed Yang was arrested and indicted on charges of manipulating and destroying evidence related to the scandal.

Yang was found to have ordered subordinates to delete about 2,100 computer files, including those containing a summary of his phone conversation with Samsung Electronics Vice Chairman Lee Jae-yong about the financial watchdog's move to file a complaint with the prosecution last July.

Yang is accused of instructing tens of Samsung Bioepis employees to delete all words that could refer to Lee, like "JY" and "VIP," in documents and files from their mobile phones and notebooks last year.

According to prosecution sources, most of Samsung officials now under arrest for their roles in the alleged accounting fraud and destruction of evidence have changed their statements to admit they had acted on orders from higher figures in the management.

But CEO Kim has persistently denied his role during prosecutors' questioning, attributing all responsibility to his company subordinates and Samsung Electronics.

Civic groups claimed the alleged window dressing was intended to enhance Lee's control of Samsung Group by seeking to inflate Cheil Industries Inc.'s stake in Samsung BioLogics ahead of Cheil's merger with Samsung C&T Corp. in 2015. Lee was the largest shareholder in Cheil Industries. It means a rise in the valuation of Samsung BioLogics has benefited Lee in his efforts to overhaul Samsung Group's governance structure.

Samsung BioLogics has claimed that the change of accounting methods and the revaluation of Samsung Bioepis in 2015 was in line with international accounting standards.