The group's fourth extended play, "NCT #127 We Are Superhuman" runs to six tracks and features "Superhuman" as its main song.

"(It) sends out a message that anyone can be a 'superhuman' if they realize their personal potential and run toward their dream with positive energy," member Jaehyun said of the EDM-laced dance song in a press conference in Seoul ahead of the album's official release Friday evening.

"I hope many people could get a boost of positive energy from our energetic performance," he said. 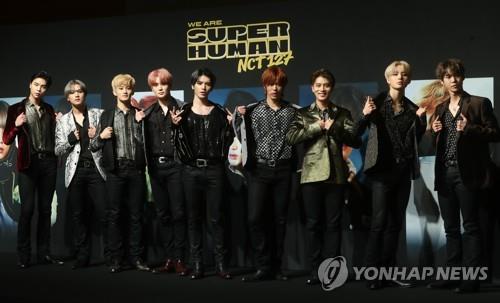 The band premiered "Superhuman" earlier in the month on the famous CBS show "The Late Late Show with James Corden" on the sidelines of their world tour, "New City - The Origin."

"We were so proud of ourselves, having staged the performance in a way that we did not regret, and the camera work was done nicely as well," member Taeil said, recalling the appearance.

During the "New City - The Origin" world tour, the band has so far performed in 20 North and South American, Canadian and Japanese cities. It's the group's first global tour and comes less than three years after NCT 127's official debut in 2016. The band plans to visit European and Asian cities down the road.

On May 31, the group is scheduled to appear at the Summer Kick Off Concert to be hosted by iHeartRadio in San Diego.

"As we toured each city, our fans enthusiastically cheered for us and sang along in the Korean language, which greatly encouraged us and taught us how to interact with the audience as well," Jaehyun said.

Doyoung said all the members were thrilled to listen to the song for the first time. "It's an exciting song, easy to listen to and different from what we have done so far."

The members also vividly witnessed during their U.S. tour the wild global attention the K-pop genre is getting right now, according to Doyoung.

"We had a chance to tour (American) cities to appear on radio shows, where the hosting DJs displayed a lot of interest in things that are related to Korea," Johnny said.

"We were honored to be able to contribute to promoting K-pop in the world ... we hope more fans will like it when we promote (our new album) in South Korea and host fan events in the U.S. going forward," band leader Taeyong said.

Soaring as high as 86th on Billboard's main albums chart, the Billboard 200, with their previous album, "Regular-Irregular," in October last year, the band became the second-highest charting K-pop boy band on Billboard after BTS.

But NCT 127 will not stop there. "We will do our best until we take No. 1 in South Korea and the United States too," Doyoung noted. 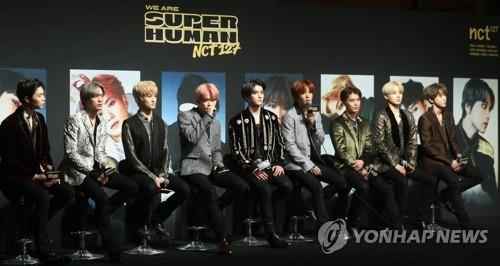