(ATTN: UPDATES with comments from press conference in paras 10-13)

Bong became the first South Korean director to win the Palme d'Or at Cannes. Before him, Park Chan-wook was awarded the Grand Prix, the second-highest prize at the festival, for his thriller "Old Boy" in 2004. 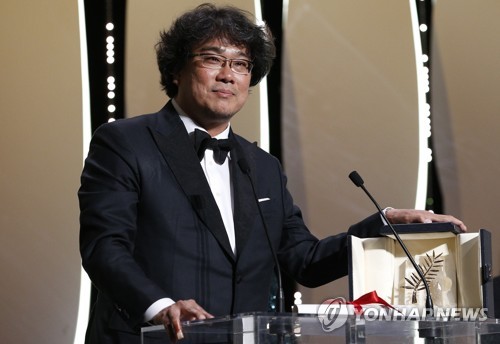 His achievement marks the sixth time that a Korean film has received one of the main competition awards at the Cannes Film Festival. Im Kwon-taek took the best director award for "Chihwaseon" in 2002, Park Chan-wook earned one twice with "Old Boy" (2004) and "Thirst" (2009) and Lee Chang-dong picked up the best screenplay award with "Poetry" in 2010. Jeon Do-yeon won the best actress award for "Secret Sunshine" in 2007.

"Parasite" finished first in a fierce competition against big-name candidates and Cannes laureates like "Pain and Glory" by Spanish director Pedro Almodovar and "Young Ahmed" by the Belgian filmmaking brothers Jean-Pierre Dardenne and Luc Dardenne.

When his name was called at the very end of the closing ceremony of the Cannes Film Festival, Bong shouted with joy and hugged his colleagues.

"I didn't prepare a speech in French, but I'm inspired a lot by French movies," he told the audience via a French-speaking interpreter at the awards ceremony. "'Parasite' was an amazing adventure for me."

He thanked his staff and cast for their dedication and contribution to completing the masterpiece.

"When I was 12 years old, I decided to become a film director," he said. "I'd never imagined the day that I touch this trophy." 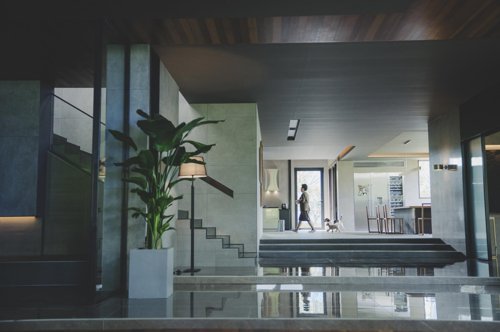 "Parasite", Bong's seventh feature film, revolves around the poor family of Ki-taek who live in a squalid, grubby basement. They become involved in a string of mishaps after the sly son gets a job as a tutor for a moneyed family residing in an opulent, gaudy mansion.

Alejandro Gonzalez Inarritu, the president of the jury, said it was a unanimous decision on "Parasite."

"The film is such a unique experience; it's an unexpected film," the Mexican director said in a press conference after the closing ceremony.

He stressed that the jury did not take into account the fact that Japanese director Hirokazu Kore-eda won it last year for "Shoplifters." Some had expected Cannes to hesitate in granting the grand prize to Asian directors two years in a row.

"The cinema had to speak for itself," Inarritu said, adding that the jury had no political agenda or message.

The Grand Prix went to "Atlantics" by Mati Diop, and the Jury Prize, the third-best honor, was granted to "Bacurau" by Kleber Mendonca Filho and Juliano Dornelles and "Les Miserables" by Ladj Ly.

The best director award was given to Jean-Pierre and Luc Dardenne for "Young Ahmed," while Antonio Banderas and Emily Beecham took the best actor and actress awards for their performance in "Pain and Glory" and "Little Joe," respectively.