The move could help health professionals prevent and treat the problems stemming from the disorder.

Committee B of the World Health Assembly unanimously approved the 11th revision of the ICD, which is set to be submitted to the plenary committee meeting for adoption by member states on Tuesday. ICD-11 will come into effect on Jan. 1, 2022, according to the WHO.

The ICD is the basis for identification of health trends and statistics globally and the international standard for reporting diseases and health conditions. It is also used by health insurers whose reimbursements depend on ICD coding.

The WHO has defined gaming disorder "as a pattern of gaming behavior ('digital-gaming' or 'video-gaming') characterized by impaired control over gaming, increasing priority given to gaming over other activities to the extent that gaming takes precedence over other interests and daily activities, and continuation or escalation of gaming despite the occurrence of negative consequences."

South Korea's health ministry plans to set up a consultative body that involves relevant ministries and experts to discuss how to deal with the WHO's decision.

The culture ministry in Seoul has informed the WHO that it's opposed to codifying gaming addiction as a disease.

The culture ministry and the Korea Creative Content Agency (KOCCA) have argued that young people engage in compulsive gaming activities not simply because of games themselves but because of psychosocial factors such as stress at school, social support from teachers and peers and parental behavior, citing a five-year study by Konkuk University's team of researchers.

Kang Gyeong-seok, who oversees games operations at KOCCA, has said classifying excessive game playing as a disease only serves as an extreme restriction on the industry and "can't be a fundamental solution" to addiction.

Online game addiction has emerged as a serious concern in South Korea in recent years.

In 2010, a 15-year-old boy killed his mother for scolding him for his excessive gaming habit and then killed himself.

The same year, a local court sentenced a game-addicted couple to two years on charges of neglecting their baby, who starved to death. The parents were preoccupied with raising a virtual daughter in a multiplayer role-playing game. 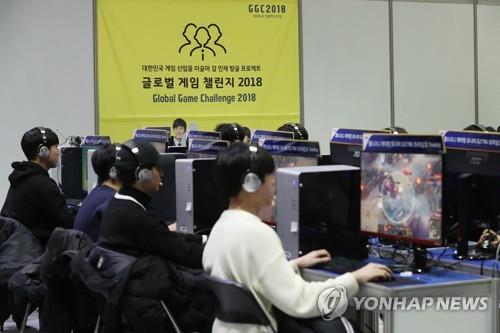