According to data released by the Ministry of Justice, 2,367,607 foreigners were residing in the country as of the end of 2018, marking a rise of 8.6 percent from a year earlier.

As a result, the proportion of foreigners, including short-term stayers, in the nation's population rose to 4.57 percent last year, compared with 3.5 percent in 2014. In other words, between four and five out of 100 people in South Korea are foreigners. 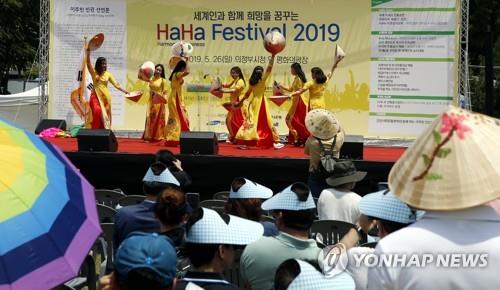 By nationality, Chinese nationals, including ethnic Koreans, still form the largest group of foreign nationals, accounting for 45.2 percent, or 1,070,566, of the foreign population, the ministry said.

The ministry noted the number of foreign students studying in South Korea increased 18.9 percent on-year to 160,671 as of the end of last year.

The rate of illegal stayers of the total foreign population also rose from 11.5 percent to 15 percent in the 2017-18 period, it said.