SEOUL, May 28 (Yonhap) -- "Arthdal Chronicles," a big-budget fantasy drama series set in the Bronze Age on a mythical continent, will hit the small screen this week, starring such high-profile actors as Jang Dong-gun and Song Joong-ki.

The 18-episode series, set against the background of the early civilization period on a fictional, mythical continent called Arth, depicts competing chieftains' power struggle to take the throne of the first nation founded on the continent.

With reportedly the biggest budget of some 40 billion won (US$33.7 million) for any Korean TV series this year, the drama series is the country's first TV show to delve into the Bronze Age that goes back more than 2,000 years before Christ.

The series has been frequently compared to the globally sensational American fantasy drama series "Game of Thrones" for depicting the process of ancient nation building and a power struggle to take the throne.

Matching the gigantic scale of its story, the series brings together an unprecedentedly high-profile cast for a TV show, including Jang Dong-gun of the 2018 film "Rampant" and Song Joong-ki, a roaring hallyu star and the main actor of the wildly popular 2016 TV drama series "Descendants of the Sun."

Kim Ji-won, who also appeared on "Descendants," and Kim Ok-bin, the heroine of 2008 film "Thirst," which won the Jury Prize at the 2009 Cannes Film Festival, also joined the main cast.

It is Song's first TV appearance since "Descendants" as well as since his marriage to Song Hye-kyo in 2017 after the couple met through the TV series.

The new tvN series' first episode will hit the small screen on Saturday and air every Saturday and Sunday, with the final six episodes to separately go on the air in the latter half of this year. 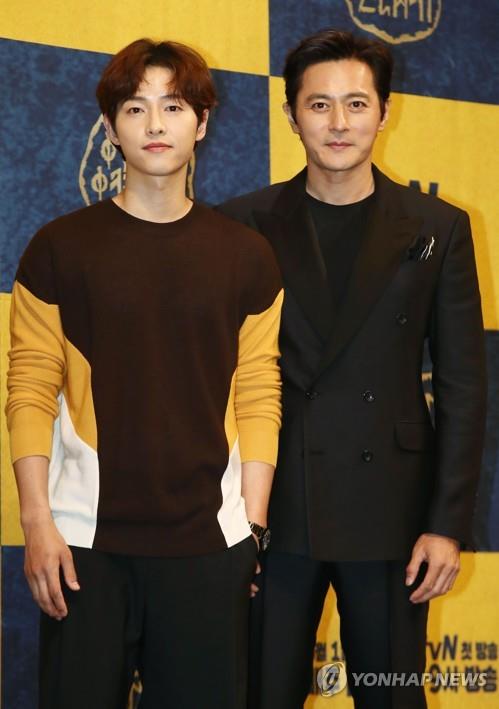