SEOUL, May 29 (Yonhap) -- Hyundai Motor Co. and affiliate Kia Motors Corp. said Wednesday their sales in the United States improved in the first four months of the year, but their slump in China continued.

In the January-April period, Hyundai and Kia sold a combined 396,793 vehicles in the U.S., up 3.7 percent from 382,470 units a year earlier, according to data from the two companies.

"Increased sales of Hyundai's Santa Fe sport-utility vehicle and Kia's Sorento SUV boosted their sales results in the past four months," a company spokesman said over the phone.

China and the U.S. are two biggest markets for Hyundai and Kia, which together form the world's fifth-biggest carmaker by sales.

In China, the carmakers still suffer declining sales due to increased competition and lack of new models, though political tensions between Seoul and Beijing have eased over the deployment of an advanced U.S. missile defense system, called THAAD, in South Korea in 2017.

Hit by the diplomatic row, Hyundai and Kia's total sales in China plunged 36 percent to 1,145,012 autos in 2017 from a year ago. The carmakers' slump continued last year with growth in their sales nearly stalled at 1,160,179 in the neighboring country. 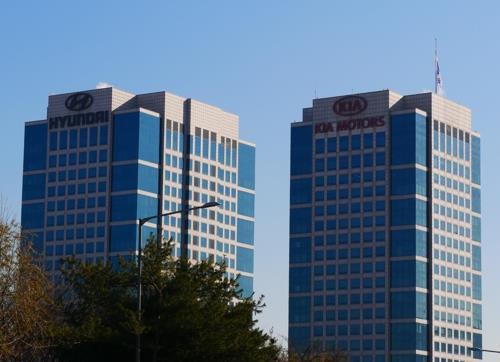