SEOUL, May 30 (Yonhap) -- Hyundai Motor Co. said Thursday it will build a commercial hydrogen charging station at the National Assembly by August in extended efforts to promote hydrogen vehicles.

It will be the first commercial hydrogen charging station in Seoul and the world's first such facility at a parliament building, Hyundai said in a statement.

"We will build more hydrogen charging stations in major cities as part of our broad efforts to establish the hydrogen infrastructure across the country," a Hyundai official said in the statement.

In the upcoming station, more than five hydrogen vehicles will be able to fully charge themselves per hour. It will initially run until May 2021 in a pilot project and continued operation will be decided later, the statement said.

The government hopes to relieve the public's concern over the safety of hydrogen charging stations by building one at the National Assembly, Industry Minister Sung Yun-mo said during a groundbreaking ceremony.

The Ministry of Trade, Industry and Energy said it is aiming to increase the number of charging stations for hydrogen vehicles to 86 by the end of the year and to 310 by 2022 from the current 21.

The ministry plans to unveil a detailed road map on nationwide hydrogen charging infrastructure by August.

In January, the ministry unveiled its so-called hydrogen economy drive, which aims to use hydrogen as the main source of energy for cars instead of fossil fuel.

Over 6 million hydrogen-powered vehicles will be produced by 2040, soaring from around 2,000 units produced through 2018, the ministry said. A hydrogen fuel cell electric car is considered to be environment-friendly as it emits only water vapor as it generates electricity.

Hyundai has received 9,057 preorders for its Nexo hydrogen passenger car since its launch in March last year and has delivered 1,691 of them as of Thursday, the company said. 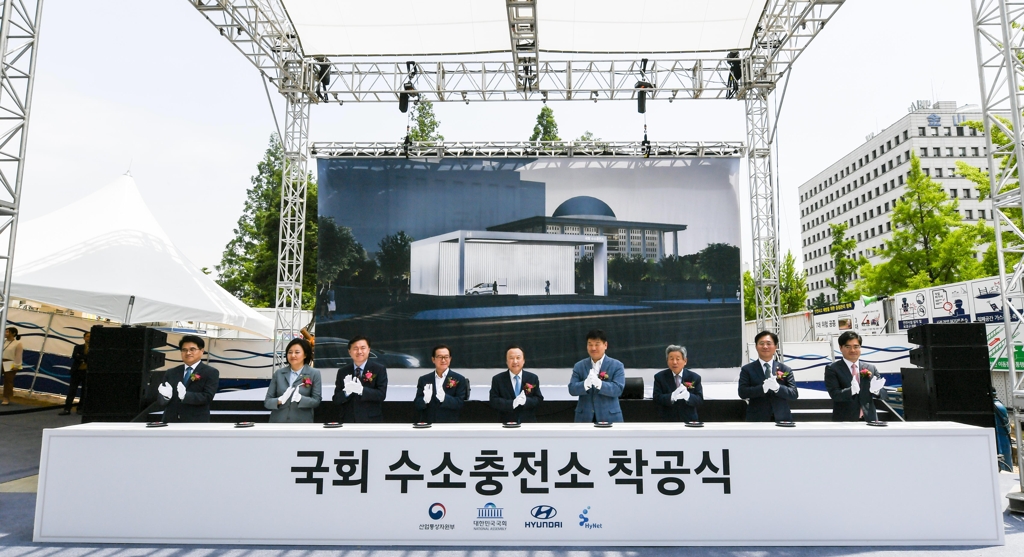