Kang made the remarks during a press conference with her Hungarian counterpart, Peter Szijjarto, after their talks in Budapest earlier in the day.

"During the meeting with Minister Szijjarto, I requested (Hungary's) continued cooperation in ensuring that the work to search for the missing will proceed in a rapid, effective manner," she said.

"I asked for the prompt lifting of the vessel, efforts to prevent the loss of the bodies and an expansion of the scope of the search in cooperation with the adjoining countries," she added.

Kang also expressed her gratitude for Hungary's support while calling for joint efforts to deal with the tragedy based on the two countries' decades-old friendship.

Szijjarto pledged his government's "all-out" efforts to search for those unaccounted for.

"Hundreds of people have been deployed for rescue operations," he said. "(We) will do our best by mobilizing the maximum number of human resources to search for the missing."

The sinking happened Wednesday night, when the sightseeing boat collided with a Swiss cruise ship on the Danube River in Budapest. The collision caused the boat to capsize and sink, leaving seven South Koreans dead and 21 others missing, including 19 South Koreans.

Little progress has been made in operations to find the missing.

Soon after her arrival in Budapest earlier in the day, Kang and Szijjarto visited the scene of the accident. She also plans to meet Interior Minister Sandor Pinter. 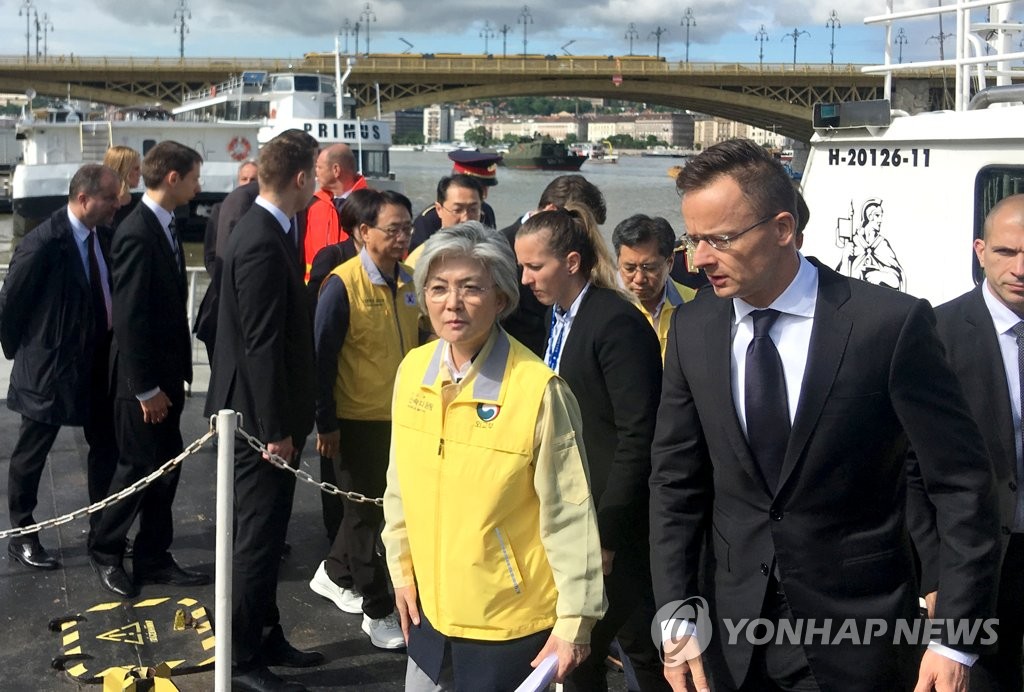 An official at Seoul's foreign ministry said that divers from Hungary's counterterrorism agency were set to launch underwater search operations inside the sunken ship as early as Friday, while Hungarian Coast Guard staff are carrying out a rescue mission with helicopters and underwater monitors.

The Hungarian authorities have also been seeking to salvage the ship out of the waters, the official said, noting that the process will proceed in close consultation with the families of the victims.

"We have heard that (the operation to salvage the ship) would take more time than thought due to the velocity of flow, which was faster than expected," he told reporters on condition of anonymity.

He added that the weather at the scene on Friday appears to be "not that bad" -- an indication that the rescue operations could pick up pace.

Hungarian police have detained a captain of the Swiss cruise ship, according to Agence France-Presse (AFP).

AFP cited police authorities as saying that the captain of the 135-meter four-story Viking Sigyn had been taken into custody and "questioned as a suspect in relation to endangering waterborne traffic resulting in multiple deaths."

A total of 33 Koreans and two Hungarian crew members were on the decades-old tourist boat amid heavy rain at the time of the accident.

Seoul's foreign ministry said that seven Koreans have been rescued. Of the survivors, six have left hospitals after treatment, while one needs treatment for a bone fracture for about one week.

Of the dead, two have been identified as they carried identification cards. Both are women in their 50s. The five others are to be identified following fingerprinting or DNA tests.

Seoul has launched all-out efforts to accelerate the rescue operations.

It mobilized 47 people from the foreign ministry, Navy, police, Coast Guard, the National Intelligence Service and fire agency. Some of them will help identify the deceased and ensure coordination with their Hungarian counterparts.

During a government disaster management session earlier in the day, Vice Foreign Minister Lee Tae-ho expressed frustration over a lack of progress in rescue operations.

"It is very regrettable that there has not been any change (for the better) as to the situation (in Hungary)," he said while presiding over the session on behalf of Kang.

"There has been no progress in rescue operations due to strong currents of waters there on top of bad weather conditions," he added.

He also said that Seoul has requested that Serbia, Croatia, Romania and Ukraine -- the countries adjacent to Hungary -- help the rescue operations.

Serbian authorities have already deployed more than a dozen seasoned divers to check if any victims drifted into its territory, a foreign ministry official here said.

The sunken boat, called the Hableany, meaning "mermaid" in Hungarian, was found near a bridge not far from the Hungarian parliament building.

The vessel was on its way back from a one-hour riverside tour, when the Switzerland-registered ship abruptly hit it from behind, a Seoul foreign ministry official said, adding that work is still under way to figure out the exact cause. 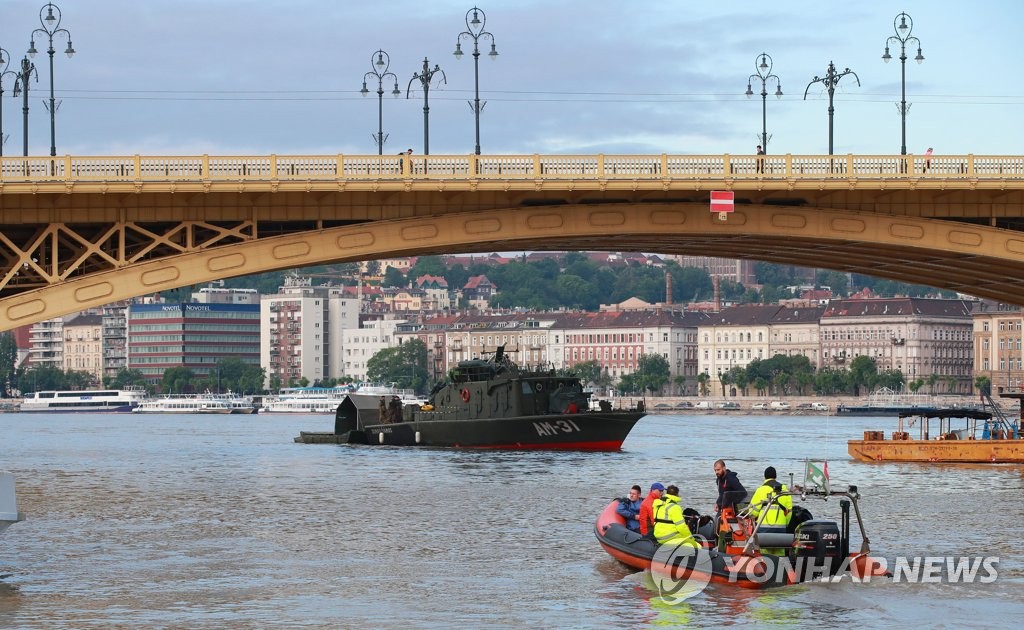