TYCHY, Poland, May 31 (Yonhap) -- South Korea defeated Argentina 2-1 to advance to the knockout stage at the FIFA U-20 World Cup on Friday.

Oh Se-hun and Cho Young-wook scored a goal apiece in Group F finale at Tychy Stadium in Tychy, Poland, as South Korea reached the round of 16 for the second straight tournament. Cristian Ferreira had the lone goal for Argentina. 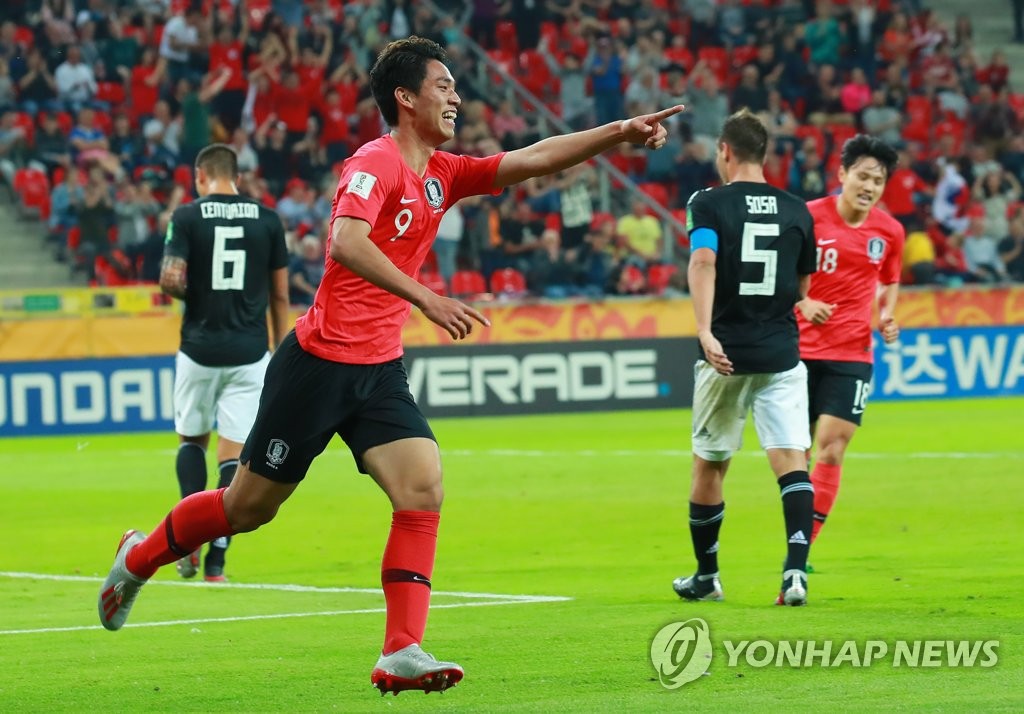 South Korea finished in second place in the group, behind Argentina, with six points from two wins and a loss. Argentina also had six points but were ahead of South Korea in goal difference, plus-4 to plus-1.

South Korea needed at least a draw against Argentina to punch their ticket to the round of 16, but they clinched the knockout berth in style by upsetting the South Americans, who'd scored seven goals in two previous matches.

The top two teams from each of the six groups, plus four best third-place teams, qualified for the round of 16.

In the round of 16, South Korea will face Japan, Group B runners-up, in Lublin next Tuesday.

South Korea's best showing at the youth tournament was a fourth-place finish in 1983 in Mexico. As the hosts of the previous competition in 2017, South Korea fell to Portugal 3-1 in the round of 16.

The teams traded few chances during the early, feeling-out period. For South Korea, Lee Kang-in's mid-range attempt missed the top-right corner in the fifth minute, while Argentina's first look at the net came in the 19th minute on Agustin Urzi's shot that went over the target.

Tomas Chancalay nearly put Argentina on the board three minutes later, when the wide-open forward sent his header just high of the net.

South Korea failed to capitalize on an open net in the 25th minute, with goalkeeper Manuel Roffo caught well out of position in a botched clearing attempt. Cho Young-wook would have had an easy goal if defender Maximiliano Centurion hadn't deflected the shot out of harm's way at the last possible second.

South Korea drew the first blood in the 42nd minute. Cho sprung Lee free on the left wing, and the skilled attacker delivered a gorgeous cross to Oh, whose header bounced past Roffo for a 1-0 lead. 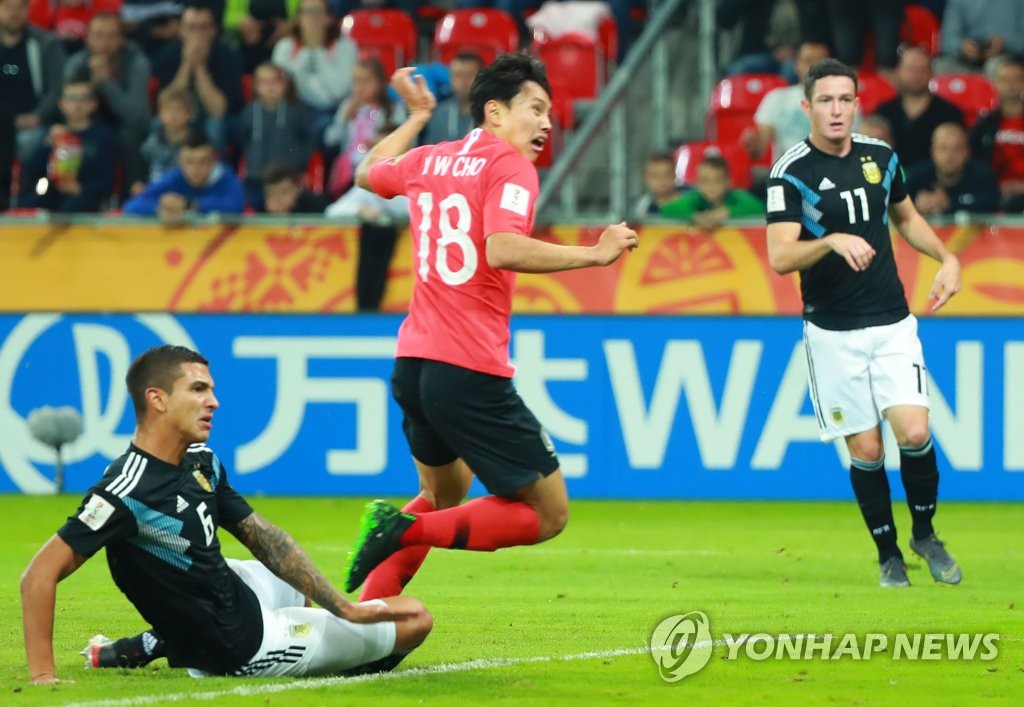 Argentina dominated the possession in the early moments of the second half, with Chancalay firing an early salvo with a header that went wide of the target in the 53rd minute.

But South Korea doubled their lead in the 57th, thanks to a great individual effort by Jeong Ho-jin. The defensive midfielder jumped in on the attack and fed Cho with a nifty pass deep in the box. Cho then fired a hard shot to the top shelf for a 2-0 lead that South Korea didn't relinquish.

South Korean goalkeeper Lee Gwang-yeon didn't get much work in the first half, but he came up with a couple of key saves to preserve the clean sheet.

First, Lee denied Adolfo Gaich from point-blank range after a South Korean turnover near the penalty spot in the 68th. About a dozen minutes later, Lee punched aside a Cristian Ferreira attempt from the center of the box.

Ferreira had his moment in the 88th minute, beating Lee with a mid-range strike from outside the left corner of the box. But Argentina, who had already secured a knockout berth before Friday's match, couldn't muster any more offense against the dogged South Korean defense.

(U20 World Cup) S. Korea reach round of 16 with win over Argentina

(U20 World Cup) S. Korea reach round of 16 with win over Argentina