TYCHY, Poland, May 31 (Yonhap) -- South Korea saved their best for the last group match at the FIFA U-20 World Cup.

The young Taeguk Warriors put in their most complete effort in the final Group F match against Argentina on Friday, pulling out a 2-1 victory at Tychy Stadium to clinch a spot in the round of 16.

South Korea entered the match needing only a draw to get into the knockout stage as the third seed. But they didn't take the back door, instead qualifying for the next phase with a gratifying win over the favored opponents. Forwards Oh Se-hun and Cho Young-wook scored a goal each. 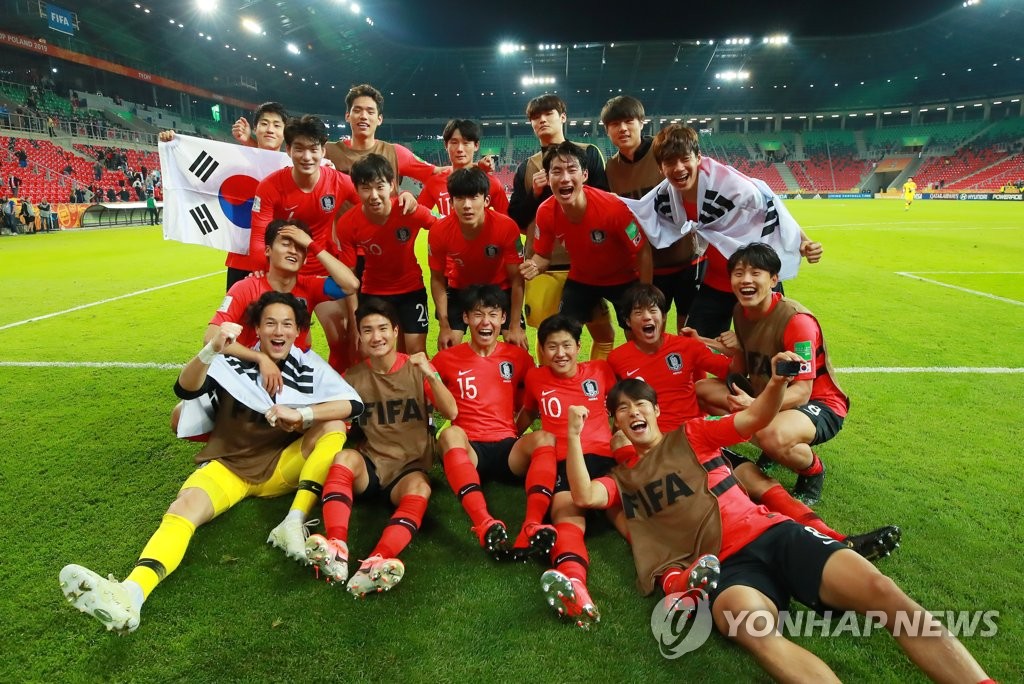 For the opening 40 or so minutes, it appeared as though the teams were headed for a scoreless draw. Argentina, who had already secured their knockout spot before Friday, seemed content with that result. And South Korea failed to generate much on offense from a defense-first 3-5-2 formation.

But Lee Kang-in, the youngest player on the field on either side at 18, changed all that with one brilliant play late in the first half.

The rising star for Valencia CF, considered South Korea's most gifted player in this tournament, had a couple of attempts toward the net in the first half. But it was his picture-perfect cross in the 42nd minute, setting up Oh's header, that changed the complexion of the match.

Oh did well to convert the opportunity, but Lee's feed from the left wing was something to marvel at, as it somehow found its way to Oh's head past multiple defenders deep in the box.

Though they didn't need to beat South Korea, Argentina still came out firing in the second half. This is when South Korea's defense rose to the occasion, snuffing out chance after chance while often outnumbering the opposing attackers.

Cho provided much-needed breathing room with his goal in the 57th minute. Defensive midfielder Jeong Ho-jin came out of nowhere and threw himself into the thick of the action, setting up Cho with a low cross through the defense. Cho, playing in his second straight U-20 World Cup, got his first career goal for a 2-0 lead.

Lee was also involved in the scoring play for Cho's goal, as his earlier through ball to Cho sent the defense scrambling and opened up space for the score.

Head coach Chung Jung-yong said Lee Kang-in was able to make the most of his offensive talent in the victory.

"I wanted to unleash him on offense and I thought that would create some space," he said. "He can hold on to the ball and he can make good passes in transition. Kang-in knew what he was supposed to do and it worked out perfectly." 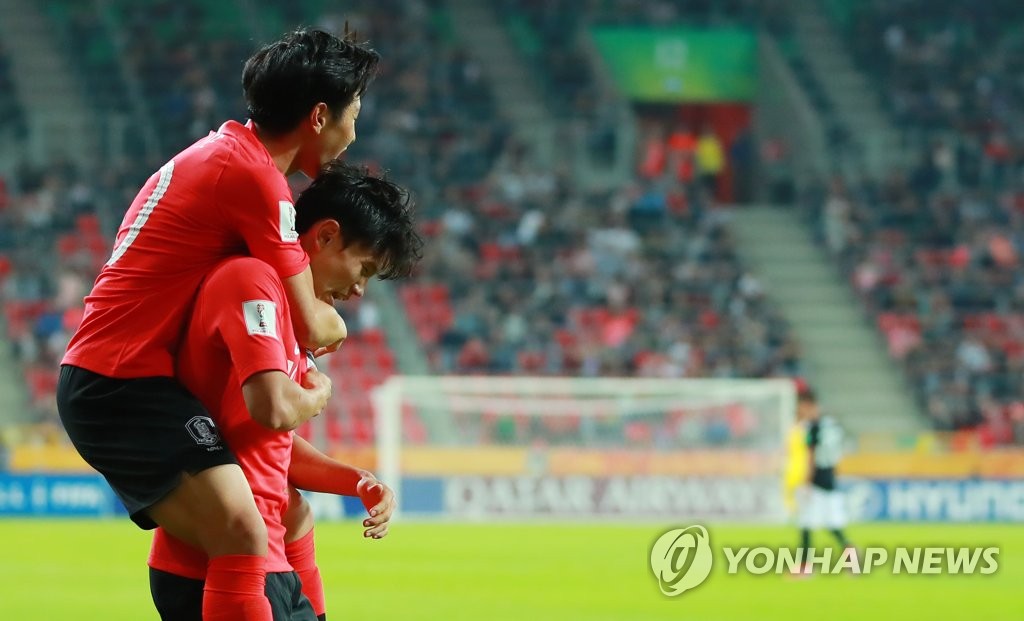 It was now goalkeeper Lee Gwang-yeon's chance to shine. Lee was South Korea's best player in a 1-0 win over South Africa Tuesday. He saw little work in the first half in this one, but made some key saves when he had to in the second half.

Lee would have secured a well-deserved clean sheet, if not for Cristian Ferreira's 88th-minute goal against an exhausted defense in front of Lee.

But the late goal did little to diminish South Korea's impressive turnaround over the past week.

They opened the tournament with a 1-0 loss to Portugal last Saturday. Their initial game plan was to lock down on defense and look for counterattack chances, but ended up giving up a goal on a fast break early in the match and never recovered. They were lucky to lose only by one goal, and their second-half push wasn't nearly enough.

South Korea were outplayed badly by South Africa in the first half Tuesday, and Lee Gwang-yeon, the goalkeeper, had to stand on his head to keep his team in the game. A second-half goal by defensive back Kim Hyun-woo salvaged a narrow victory, and Lee had to make a desperate save in the final seconds to secure the precious three points for his team.

In essence, South Korea had played one good half each against their first two opponents. They weren't going to get away with such incomplete play against Argentina, and they showed up on both ends for the full 90 minutes when it counted.

Chung said he was pleased with the way his defense has grown stronger as the tournament has progressed.

"We needed to have better execution on the defensive end (earlier in the tournament), and our guys battled hard in this match," he said. "As we move on, our players should have even better organization."

Next up in the round of 16 on Tuesday will be Japan, who finished as runners-up in Group B. Japan opened their tournament with a 1-1 draw against Ecuador, before beating Mexico 3-0 and taking a scoreless draw against Italy.

Lee Kang-in said he was pleased to have reached the round of 16 but he wants to keep going deeper into the tournament.

"I think we're becoming a better team with each match," Lee said. "We may or may not win the next match, but our goal is to do the best we can. If we keep doing what we've done and focus on our strengths, we should be able to come away with a good result."