He, however, stressed his strong backing for diplomacy "to achieve the final, fully verified denuclearization of North Korea and uphold the international rule of law," in his keynote speech during the 18th Asia Security Summit, better known as the Shangri-La Dialogue, in Singapore.

"We acknowledge that North Korea has neared a point where it could credibly strike regional allies, U.S. territory, and our forward-deployed forces. North Korea remains an extraordinary threat and requires continued vigilance," Shanahan said.

Negotiations on North Korea's nuclear programs have been stalled since February when the second summit between U.S. President Donald Trump and North Korean leader Kim Jong-un ended without results.

Shanahan said his role is to be ready "in the event diplomacy fails" but added that the "first and foremost resolution is the enforcement of the U.N. Security resolution."

He also called for China's commitment by saying that the enforcement of U.N. sanctions on North Korea is "where we have an alignment of interests."

Noting that South Korea hosts 28,500 U.S. service members; two fighter wings of F-16 and A-10 aircraft; and a host of other forces, including a Terminal High-Altitude Area Defense (THAAD) battery, the Pentagon chief said, "Together, we deter aggression on the Korean peninsula, support the path of diplomacy."

But he stressed that he has "full confidence in the ability to negotiate the fully denuclearized Korean Peninsula." 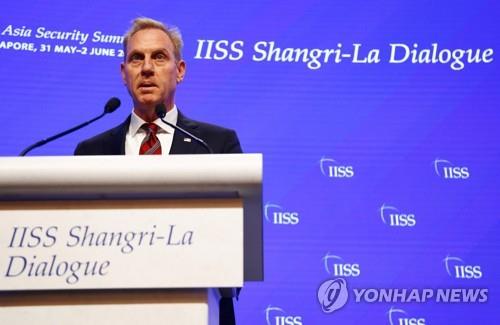 Calling the Indo-Pacific "our priority theater," the Pentagon chief stressed the strong U.S. commitment to the region, including a huge investment in securing its stability.

"We are investing in advanced missile defense systems, interoperable with allied systems in Japan, Australia, and South Korea ... We need you to invest in ways that take more control over your sovereignty and your own ability to exercise sovereign choices," Shanahan added.

During his press gaggle on Thursday, Shanahan said the tests are in violation of the U.N. Security Resolution sanctions, though he did not describe the missiles as "ballistic" ones.

The acting secretary is on a four-nation trip to Asia, which will also take him later to South Korea and Japan where he is to hold bilateral talks with his counterparts there.