GENEVA, June 1 (Yonhap) -- The captain of a cruise ship was formally arrested on Saturday after a Hungarian court issued an arrest warrant following a deadly collision that left seven South Koreans dead and 21 people missing.

The court approved the arrest of the 64-year-old Ukrainian captain, identified as Yuriy C, on charges of negligence and carelessness over the accident.

A lawyer for the captain said he is in an unstable condition after the accident and would like to convey his deep sympathy to the victims' families.

The decades-old Hableany carrying 33 South Koreans and two Hungarian crew members capsized and sank soon after being hit from behind by the Swiss-registered Viking Sigyn.

Footage from a security camera released by a cruise alliance made up of local tourist boat operators showed that the Viking Sigyn hit the Hableany and disappeared from view before moving back to the accident site. It then resumed its previous course.

South Korean and Hungarian workers carried out joint operations on Saturday to search for the 21 missing people, officials said, but the operations were hampered by high waters and strong currents.

They conducted surface-level searches up to 50 kilometers down the Danube River from the site of Wednesday's disaster.

On Saturday, South Korean Foreign Minister Kang Kyung-wha met a 66-year-old South Korean survivor, identified only by the surname Lee, at a hospital in Budapest and later told reporters that it's difficult to say when the victim could be discharged.

Kang said Lee could barely speak due to physical exhaustion following a long trip and the accident.

The hospital officials said Lee is in a stable situation but has not recovered enough to be released and fly back to South Korea. 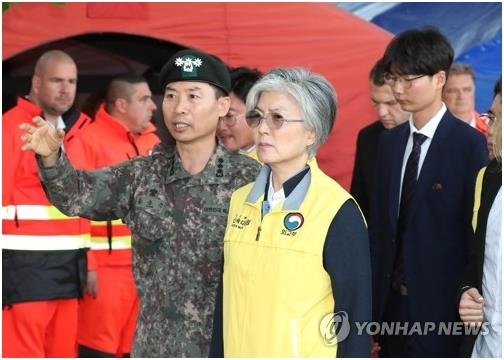