SINGAPORE, June 1 (Yonhap) -- South Korean Defense Minister Jeong Kyeong-doo reiterated Saturday that more analysis is needed to determine if what North Korea test-fired last month are ballistic missiles or not, even though his U.S. and Japanese counterparts characterized the launches as a violation of U.N. sanctions.

Jeong made the remark during a session of the Asia Security Summit, also known as the Shangri-La Dialogue, in Singapore, stressing that the assessment of the North's May 9 launches is based on the close cooperation and coordination with the United States.

"There are many discussions on whether they are short-range ballistic missiles or not ... There are similarities, but there are also differences. So we need more analysis to make sure and verify the nature," Jeong said in an answer to a question from the audience.

Speaking at the same session, Japanese Defense Minister Takeshi Iwaya said that he believes that North Korea test-fired "short-range ballistic missiles," and that it is a shared view between the U.S. and Japan.

On Thursday, acting U.S. Secretary of Defense Patrick Shanahan also told reporters, "These were short-range missiles and those are a violation of the UNSCR. Yes." UNSCR stands for U.N. Security Council resolutions.

Under the resolutions, the North is banned from test-firing ballistic missiles.

Experts have said they are the North Korean version of Iskander, a short-range ground-to-ground ballistic missile, and the political opposition alleged that the Seoul government is reluctant to acknowledge the missiles over concerns it could negatively affect the negotiating process with Pyongyang.

On May 4, the North launched a fusillade of projectiles, which involved "a new type of tactical guided weapon" and 240-mm and 300-mm multiple rocket launcher systems. Five days later, it fired a barrage of projectiles, including two short-range missiles, according to the South Korean Joint Chiefs of Staff (JCS).

The defense ministers of South Korea, the U.S., and Japan are to hold a trilateral meeting on Sunday in Singapore, with the North Korean issue expected to top the agenda. 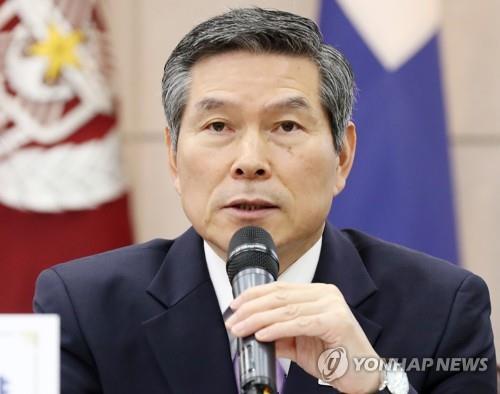