SINGAPORE, June 1 (Yonhap) -- The chief nuclear envoys of South Korea and the United States were to hold a meeting in Singapore on Saturday to discuss ways to bring North Korea back to the negotiation table, an official said.

Earlier in the day, Lee held a breakfast meeting with his Japanese counterpart, Kenji Kanasugi. The three nuclear envoys also held a dinner meeting on Friday.

"Lee and Biegun have been actively exchanging opinions to find ways to resume dialogue with North Korea," the official said.

Negotiations between Washington and Pyongyang are at a stalemate following the no-deal summit in February between U.S. President Donald Trump and North Korean leader Kim Jong-un in Hanoi.

Both Seoul and Washington have called on North Korea to return to negotiations on its denuclearization, stressing that the door for diplomacy remains open.

On Thursday, the State Department said in a release that Biegun will visit Singapore from May 31-June 2 to attend the dialogue and to meet the officials "to discuss continued coordination on our goal of the final, fully verified denuclearization of North Korea." 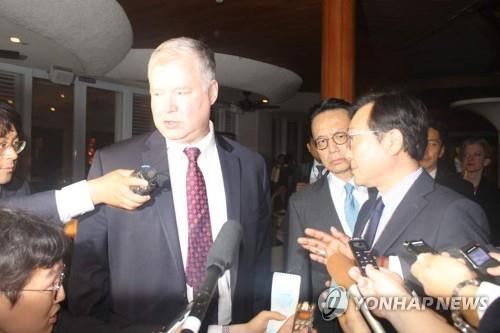