SINGAPORE, June 1 (Yonhap) -- The defense ministers of South Korea and Japan held one-on-one talks in Singapore on Saturday for the first time since military relations between the two countries soured over a radar row in December.

The meeting between South Korean Defense Minister Jeong Kyeong-doo and his Japanese counterpart, Takeshi Iwaya, lasted about 40 minutes on the sidelines of the Asia Security Summit, also known as the Shangri-La Dialogue.

Defense ties between Seoul and Tokyo have been strained since December, when Japan claimed that a South Korean warship directed military tracking radar at its maritime patrol aircraft. South Korea has rejected the claim, saying the airplane needlessly approached the ship, which was on a normal rescue mission.

"We candidly and openly exchanged our opinions on the matter and agreed to cooperate closely to develop our relations to prevent any recurrence of such an incident," Jeong told reporters.

The meeting helped put their dialogue channel back on track out of the need for cooperation in the face of key issues of mutual interest such as North Korea. But the two sides appeared to have failed to settle the radar row during the talks, as the ministers repeated their own stances.

"The two sides have maintained working-level discussions and agreed to continue to do so. ... We will leave it to our staff to resolve the matter in a positive direction," the South Korean minister added.

The last bilateral talks between defense chiefs of the two countries took place in October 2018. 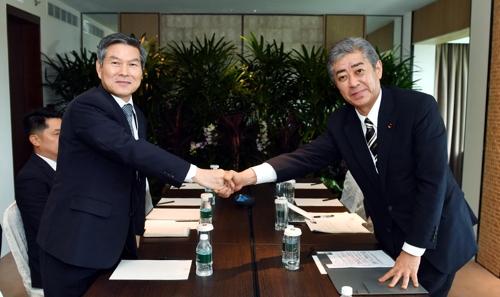 According to the Seoul ministry, Jeong told Iwaya that the allegation of "directing the radar is groundless, and the feud was essentially caused by the low-altitude, intimidating flight of the Japanese aircraft," the Seoul ministry said in a release.

He then called on Japan to abide by international law and the "Code for Unplanned Encounters at Sea," a 2014 agreement signed by 22 countries, including South Korea, Japan, the United States, China and Russia, aimed at reducing the chances of incidents at sea.

"In order to strengthen stable security circumstances in Northeast Asia, the two ministers shared the importance of the swift resolution of pending issues and vowed their commitment to defense cooperation over the denuclearization of the Korean Peninsula and the establishment of a peace regime," the ministry said.

While the Seoul ministry did not elaborate on Iwaya's remarks, Japan's Kyodo News reported that Iwaya said he believes "there is only one truth" but the two sides "should take one step further back based on a future-oriented viewpoint."

On Sunday, the two ministers will hold a trilateral meeting along with acting U.S. Secretary of Defense Patrick Shanahan.