SINGAPORE, June 2 (Yonhap) -- Top defense officials from major Asia-Pacific countries meeting in Singapore this week called for diplomacy ahead of anything else to resolve the North Korean nuclear issue, despite the deadlock in nuclear negotiations between Pyongyang and Washington. 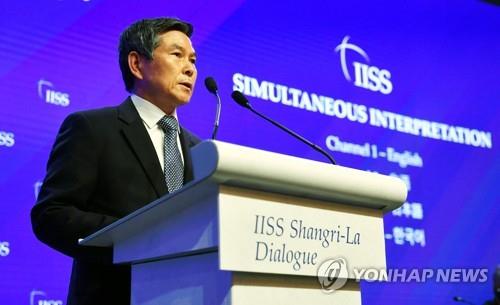 "I will continue to maintain a watertight combined posture so as to proactively support ongoing diplomatic efforts," Jeong said in his keynote speech on Saturday, noting that it is crucial to "leave some room in the military sphere to let diplomacy work."

Negotiations on North Korea's nuclear program have been stalled since the breakdown of the second summit between U.S. President Donald Trump and North Korean leader Kim Jong-un in Hanoi in February.

Alhough Seoul and Washington have called for Pyongyang's return to dialogue, it has instead been escalating tensions, albeit slowly, by hardening its rhetoric and test-launching projectiles, including short-range missiles.

As part of efforts to garner such backing, Jeong held bilateral talks with nine counterparts from partner entities, including Japan, China, France, Vietnam, the European Union and NATO, as well as a trilateral meeting involving the U.S. and Japan, on the sidelines of the three-day annual forum, which was set to close later in the day.

Noting that tensions on the peninsula have been greatly reduced since last year thanks to the successful implementation by the two Koreas of a military agreement, the minister appealed for concerted international efforts for denuclearization and a permanent peace.

Drawing particular attention were his bilateral meetings with Japanese and Chinese ministers that signaled the restoration of strained defense ties with the key neighbors. South Korea's defense relations with Japan and China had deteriorated over a radar row and a U.S. missile defense system, respectively.

"We all shared the need to work closely for the peaceful resolution of North Korea's nuclear programs, which is our shared, ultimate goal," Jeong told reporters.

Acting U.S. Secretary of Defense Patrick Shanahan also stressed his "full confidence in the ability to negotiate the fully denuclearized Korean Peninsula," and voiced support for diplomacy to achieve the goal.

China was no different, underscoring its commitment to peace and stability on the peninsula and expressing hope for the early resumption of the Washington-Pyongyang talks. 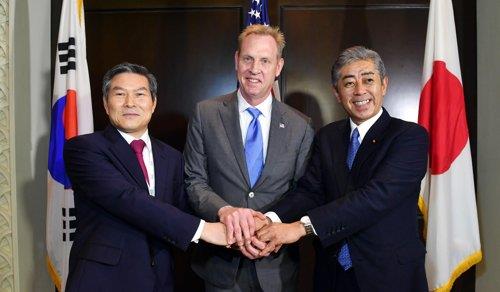 The unusual participation of top nuclear envoys from South Korea, the U.S. and Japan in the gathering of defense officials also highlights those key nations' emphasis on diplomacy in dealing with North Korea.

Lee Do-hoon from South Korea, Stephen Biegun from the U.S. and Kenji Kanasugi from Japan held bilateral and trilateral meetings while in Singapore and attended discussion sessions to listen to opinions from military leaders from around the world on the matter.

Their gatherings in Singapore aimed to explore ways to promptly resume the talks on the continued coordination of their denuclearization goal, according to officials.

The host country of the Shangri-La Dialogue itself may bear significance for the top negotiators, as the historic first summit between leaders of the U.S. and North Korea took place here last year, they added. 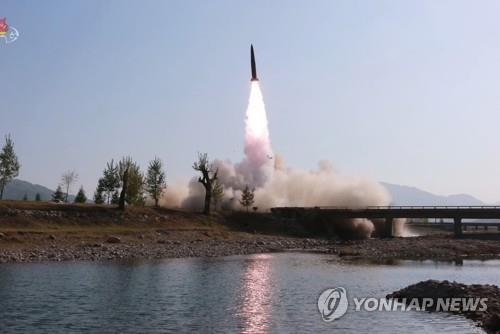 Despite their agreement on the importance of diplomacy, the participants differed markedly in how they assess the threat from the North, with the U.S. and Japan taking a more serious view and the South taking a cautious approach so as not to disrupt the negotiating process.

"We acknowledge that North Korea has neared a point where it could credibly strike regional allies, U.S. territory, and our forward-deployed forces. North Korea remains an extraordinary threat and requires continued vigilance," Shanahan said in his keynote speech.

In his press gaggle, the Pentagon chief also said North Korea's missile launches last month were in violation of U.N. Security Council resolutions that ban Pyongyang from launching ballistic missiles, though he came short of directly labeling the weapons as "ballistic."

On May 4 and 9, North Korea fired projectiles, including short-range missiles, in an apparent attempt to induce Washington into making a compromise in denuclearization negotiations.

Stressing that his role is to be ready "in the event diplomacy fails," Shanahan then urged countries to focus on the full enforcement of U.N. sanctions.

"North Korea still maintains hundreds of ballistic missiles which put the entirety of Japan within their range," he noted.

But the South Korean minister has maintained his earlier position that more analysis is needed to verify if they were ballistic missiles or not, emphasizing that it is based on a joint assessment with the U.S.

Asked about his view of Shanahan's mentioning of North Korea as an "extraordinary" threat, Jeong said it appears to be the general description of North Korea's existing nuclear and missiles programs.

"I, for my part, have been fully explaining our efforts to de-escalate tensions, and Shanahan as well as many other leaders expressed their understanding and shared evaluation," Jeong told reporters.

The Chinese defense minister did not mention the North's recent missile firings, at least publicly during his three-day stay in Singapore.

"Different views among countries on North Korea and the ongoing process for its denuclearization are sure to reflect their own political and economic circumstances and calculations," said Kim Sung-han, a professor at Seoul's Korea University.

"At this time of Sino-U.S. rivalry ... South Korea is forced to come up with more sophisticated strategies," he added.

The great power game took the center stage of the Shangri-La Dialogue, as both Shanahan and Chinese Defense Minister Wei Fenghe were not reluctant to openly send strong warning messages to each other by bringing up geopolitically and economically contested issues, including the South China Sea and trade disputes.