SINGAPORE, June 1 (Yonhap) -- South Korea's defense minister delivered the military identification tag of a French soldier who fought in the 1950-53 Korean War to the French defense minister on Saturday, his office said.

During the bilateral talks with his French counterpart, Florence Parly, in Singapore, Jeong handed over the item, which was found to have belonged to Yves Moalic, who served as a medic during the Korean War as part of the United Nations Forces.

He died on Oct. 6, 1952, during the battle on the ridge and was laid to rest later in his home country, according to the ministry. 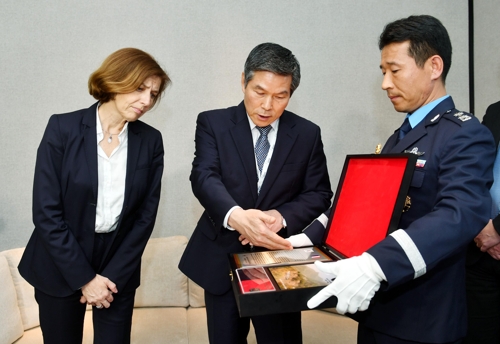 It was the first time that an item believed to belong to a French soldier was found over the course of the excavation project that began in April.

Eight French soldiers who fought the Korean War went missing, and three of them are presumed to be buried on or around Arrowhead Ridge in the border county of Cheorwon, Gangwon Province.

"Minister Jeong vowed to make the utmost efforts for the swift excavation and repatriation of the remains of the missing service persons," the ministry said in a release.

During a press briefing, Jeong told reporters, "Such a meaningful event is expected to help the two sides strive further to bolster the bilateral relations and to deepen defense cooperation."

So far, the military has discovered more than 325 pieces of bone, presumed to be from around 50 people, and over 23,000 items during the project.

But the North has remained unresponsive to calls for it to participate as agreed, leaving the South Korean military to carry out the operation alone. 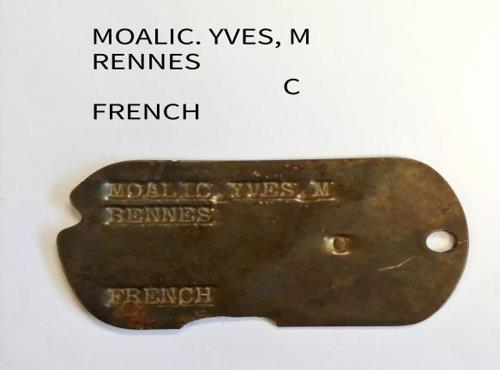 Separately, the South Korean defense minister met with Federica Mogherini, who serves as high representative of the European Union for foreign affairs and security policy, and discussed issues relating to North Korea and bilateral military ties, according to the ministry.

"The EU representative said that the EU put the denuclearization of the Korean Peninsula as its top priority, and vowed to actively support such efforts," the ministry said in a release. 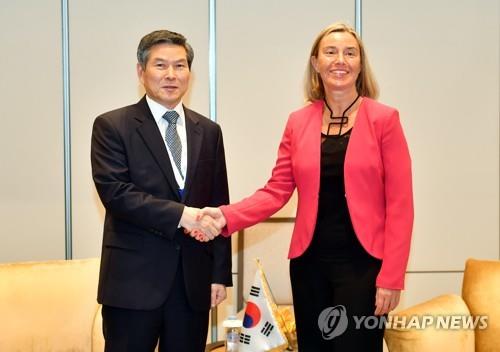 During bilateral talks between Jeong and British Defense Minister Penny Mordaunt, the two sides shared an assessment of their defense cooperation, including exchanges of high-level military officers and the operation of a regular consultative body.

"The South Korean minister asked for Britain's proactive support for North Korea's return to the negotiation table ... and Mordaunt pledged endeavors for the complete denuclearization of the Korean Peninsula and a lasting peace along with the international community," the ministry noted.

Jeong's bilateral meetings with European partners took place on the sidelines of the Asia Security Summit, better known as the Shangri-La Dialogue, under way in Singapore.