SEOUL, June 2 (Yonhap) -- Tottenham Hotspur's Son Heung-min has made a small piece of history in the UEFA Champions League final.

Son became only the second South Korean to start the championship match in the top European club tournament, as the Spurs lost to Liverpool 2-0 at Wanda Metropolitano in Madrid on Saturday (local time). The 26-year-old attacker joined former Manchester United midfielder Park Ji-sung in the exclusive company. Park started two Champions League finals for Man United in 2009 and 2011. 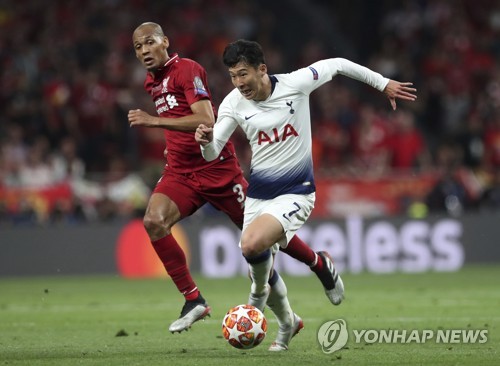 In the starting lineup, Son formed the "DESK" line with Dele Alli, Christian Eriksen and Harry Kane, though the Spurs came up empty-handed against their Premier League foes.

Liverpool struck early with Mohamed Salah's penalty in the second minute. Divock Origi netted the insurance goal in the 87th minute to give Liverpool their first Champions League title since 2005.

Son had a couple of moments on the attack early. In the 10th, he tried to cut in from the left wing but was met by a wall of defenders. Son was sprung up the middle on a counterattack opportunity, only to be thwarted by Trent Alexander-Arnold.

Son made his presence felt again late in the second half, as Tottenham tried desperately to pull even. He drove into the box in the 73rd minute and fed the ball to his left to Alli, who only managed a floater right at goalkeeper Alisson Becker.

Alli set up Son for a near clean break two minutes later, though Virgil Van Dijk stepped up to challenge Son.

Son's first shot on target came in the 81st, though the left-footed attempt rolled weakly into Becker. 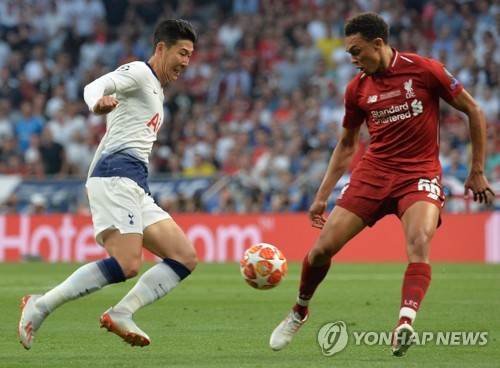 With Liverpool leading 2-0, Son tried to salvage a goal for his side during added time. His low left-footed shot forced Becker to make a tough diving stop, denying the Spurs on their last real scoring opportunity.

Son wrapped up the 2018-2019 season with 20 goals in all competitions, one shy of a career high established two seasons ago. He had four in the Champions League.

There is no rest for the weary, though. Son is scheduled to join the South Korean national team on Tuesday as they prepare for friendly matches against Australia on Friday and Iran on June 11.