LONDON, June 2 (Yonhap) -- Excited and nervous ahead of their landmark first concert at London's Wembley Stadium on Saturday, the members of K-pop boy band BTS said they will make history at the heart of world pop music.

"We are finally here at Wembley Stadium after everybody's anticipation and waiting. First of all, (we are) very honored. I want to thank our fans for this honor," BTS member J-Hope said in a press conference at the prominent football stadium, hours before their concert here.

"Our mindset, though, remains unchanged. As an artist who always love performances, I will do my best and write BTS' new history at this historic venue," J-Hope said, beaming with excitement. 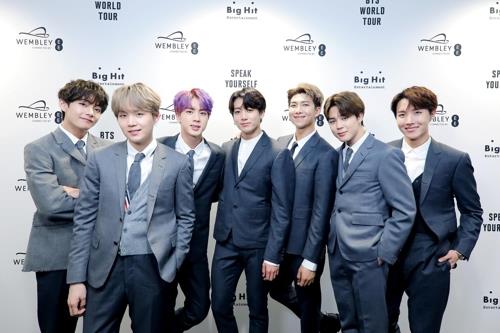 The Saturday-Sunday concerts at Wembley Stadium, the biggest concert venue in Britain, where such big-name artists as Michael Jackson, Madonna and Celine Dion have performed, mark another career-boosting moment for BTS.

The band had initially planned to perform a single night concert at this 90,000-seat stadium but changed it into a two-day event as the tickets for the first concert sold out in less than two hours. For the two days, a combined 120,000 fans will be admitted.

"It's amazing that we stand at a stadium which I have only seen on TV," member Suga said. "It was beyond my imagination and something that I haven't even dreamed came true. I feel like I am still dreaming. I thank (European fans) so much for loving the K-pop culture which started in a very distant country."

The band members also marveled at and thanked international fans for their efforts to learn the culture and language of Korea, the band's home country.

"Language is something very difficult to learn. (But) many people are learning our (Korean) language to listen to our music and share its feelings. I thank you very much," member Jin noted.

The British leg of the on-going "Love Yourself: Speak Yourself" world tour came after BTS took the world by surprise with their latest album, "Map of the Soul: Persona."

Following its release in late April, the new album instantly topped the main Billboard album chart, Billboard 200. It was the band's third Billboard 200 No. 1 within a span of one year, a feat last achieved by the Beatles.

"It's somewhat burdensome to be called the Beatles of the 21st century. We should be working harder not to taint the name of the Beatles," Suga said. "Today we are wearing Thom Browne," he also tipped, referring to the band members' sleek suits that bear resemblance to the fashion of the legendary British band.

"On top of that, we have high hopes that we could carve out a solid presence as 21st-century BTS," Suga added.

Team leader RM weighed in, saying that "It's really flattering to be compared to the Beatles who influenced virtually all the contemporary artists. It's humbling to hear that and it encourages us to work harder." 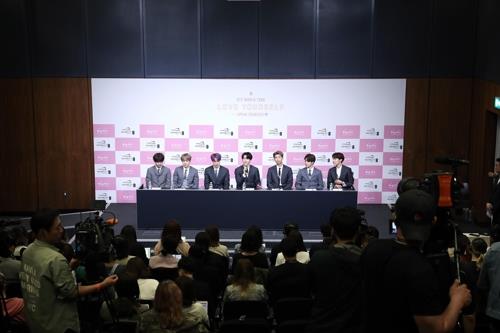 At the beginning of the press conference, the members also extended their condolences to the Korean victims of the tourist boat Hableany that sank in the Danube River last week. Seven South Koreans died and 21 others went missing in the sinking.

Some 100 journalists gathered for the Saturday press conference, including many local journalists from British news outlets, such as BBC and The Daily Telegraph.

As if to accommodate such high attention, the Saturday concert at Wembley will be broadcast live on South Korean internet portal Naver's V Live.

"We are very encouraged by that," leader RM said, calling the online live broadcasting "revolutionary and unprecedented."

BTS' next stop in Europe is France where the band is scheduled to perform at Stade de France in Saint Denis, just north of Paris, from June 7-8.