The pledge was made during the trilateral meeting among South Korean Defense Minister Jeong Kyeong-doo, acting U.S. Defense Minister Patrick Shanahan and their Japanese counterpart, Takeshi Iwaya, in Singapore on the sidelines of the Asia Security Summit, also known as the Shangri-La Dialogue.

The three sides "vowed to closely cooperate to support the current diplomatic efforts to establish complete denuclearization and permanent peace on the Korean Peninsula," according to their joint statement.

Exchanging their views on the recent missile launches by North Korea, the ministers also pledged to stay vigilant with regards to related moves by Pyongyang.

On May 4 and 9, the North launched a fusillade of projectiles, including short-range missiles. Though experts labeled them as North Korea's version of Russia's Iskander ballistic missiles, South Korea has said it is analyzing to determine the exact type in close coordination with the U.S.

They also shared the need for North Korea to completely abide by international duties in accordance of the resolutions that require Pyongyang's complete denuclearization "in verifiable and irreversible manners."

The defense leaders also committed to further trilateral security cooperation through information sharing, high-level policy consultations and combined exercises, as such security mechanisms play a crucial role in maintaining peace and stability in the region. 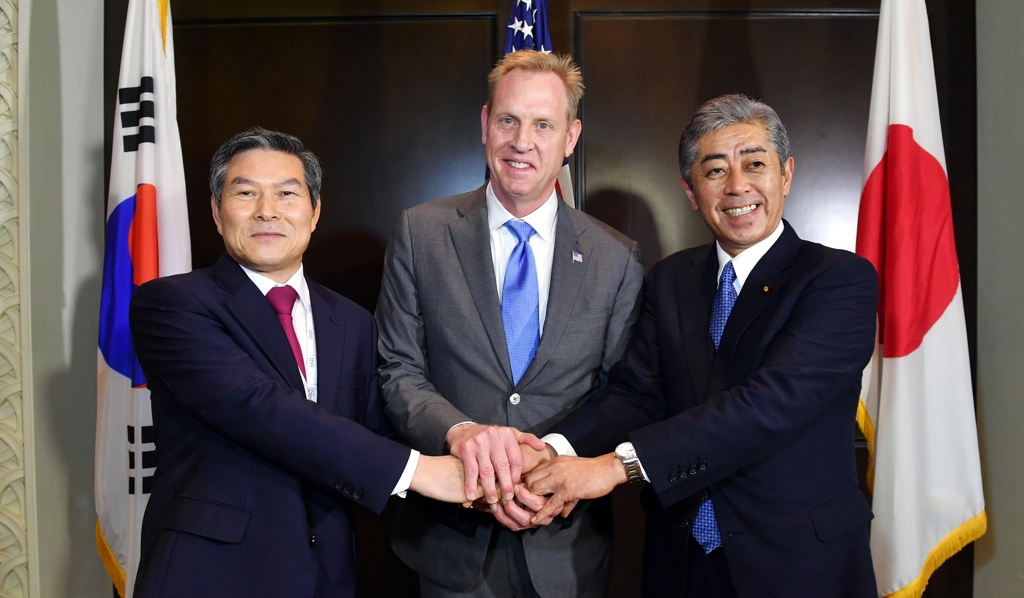 In his opening remarks, Jeong said the three nations have successfully led North Korea to change its course, and called for concerted efforts to bring it back to the negotiation table.

Stressing the importance of the trilateral security mechanism in "achieving the complete denuclearization of North Korea in a fully verified manner," Shanahan vowed his country's continued prioritization of trilateral defense cooperation.

The meeting took place at a time when negotiations on North Korea's nuclear programs have been stalled since the breakdown of the second summit between U.S. President Donald Trump and North Korean leader Kim Jong-un in Hanoi in February.

Since then, Pyongyang has been slowly escalating tensions by hardening its rhetoric against Seoul and Washington and launching projectiles, including short-range missiles.

The South Korean and Japanese ministers held a one-on-one meeting a day earlier, and Jeong will have a bilateral meeting with Shanahan on Monday in Seoul.