The minister made the remarks in his keynote speech during the Asia Security Summit, better known as the Shangri-La Dialogue, in Singapore.

"China is committed to denuclearization, peace and stability of the Korean Peninsula and to a negotiated solution through dialogue and consultation," the general said, noting that China has played "an irreplaceable and constructive role" toward those goals.

Expressing hope for Washington and Pyongyang to be cool-headed and patient, he urged the two sides to "resume the dialogue for peace at an early date ... and to combine denuclearization with the establishment of a peace mechanism."

Negotiations between Washington and Pyongyang are at a stalemate following the no-deal summit in February between U.S. President Donald Trump and North Korean leader Kim Jong-un in Hanoi, due to their gaps over the scope of Pyongyang's denuclearization and Washington's sanctions relief.

The U.S. and South Korea have called on North Korea to return to the negotiation table, stressing that the door for diplomacy remains open.

The minister also mentioned the need to consider lifting sanctions against Pyongyang by saying that the international community should "positively respond to the legitimate concerns of the DPRK and trigger the reversible clause of the UN Security Council resolutions in due course."

DPRK is the acronym of North Korea's official name, the Democratic People's Republic of Korea.

He also urged to push for a declaration to formally end the 1950-53 Korean War. 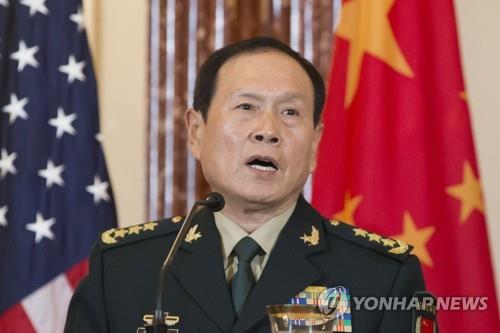 The Chinese minister spent most of his speech sending strong warning messages to the U.S., intensifying their rivalry in the Asia-Pacific region.

The two giants have been on a collision course recently on a wide range of issues, including protracted trade disputes and their presence in the highly contested South China Sea.

"China's construction on its South China Sea islands and reefs militarization are the legitimate rights of a sovereign state to carry out construction on its own territory," the general claimed, adding that "some countries outside the region" come to the sea to flex muscles, a thinly veiled remark targeting the U.S.

A day earlier, acting U.S. Secretary of Defense Patrick Shanahan criticized China for its militarization of the South China Sea region, saying they are "excessive" and "a bit overkill."

"We hope that the U.S. will work with us towards the same goal, follow the principles of non-conflict, non-confrontation, mutual respect and win-win cooperation, and steer the China-US relations in the right direction," the Chinese minister said.

Wei is the first Chinese defense chief to attend the Shangri-La Dialogue since 2011. During the three-day forum that kicked off on Friday, he held bilateral talks with his counterparts, including South Korean Defense Minister Jeong kyeong-doo and Shanahan.