SEOUL, June 3 (Yonhap) -- South Korea and the United States agreed Monday to name a separate Korean four-star general to lead their envisioned future joint command and relocate its headquarters, currently in Seoul, to an American base south of the capital, Seoul's defense ministry said. 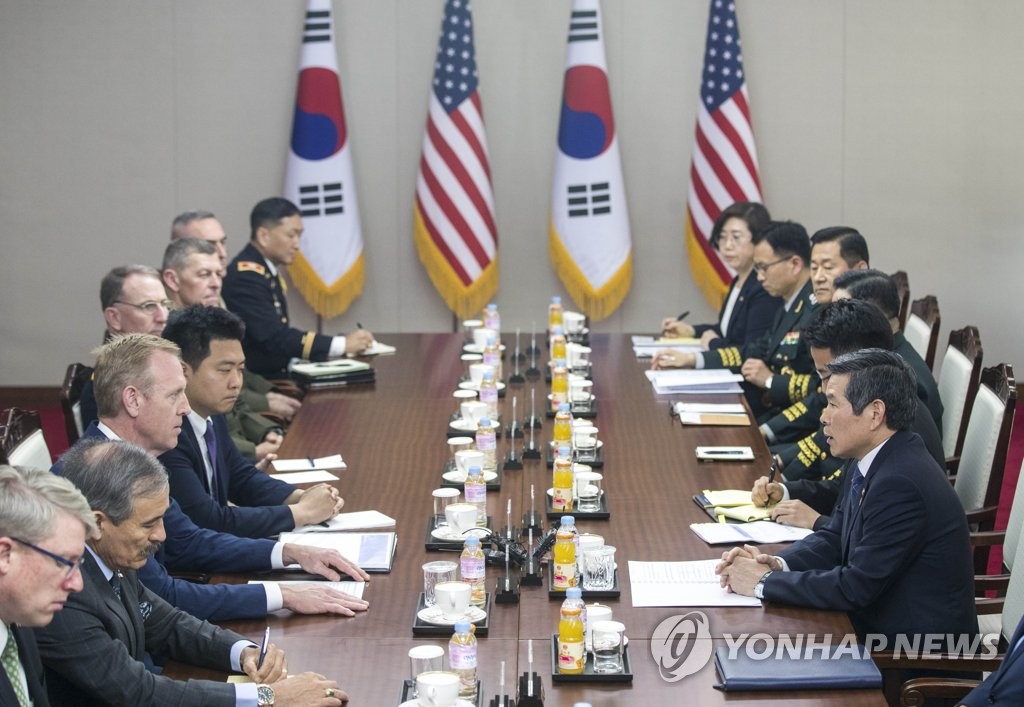 The agreement ended speculation that Seoul may have the chairman of its Joint Chiefs of Staff or chief of the Ground Operations Command double as the chief of the South Korea-U.S. Combined Forces Command (CFC).

Currently, a four-star U.S. Army general helms the CFC. After Seoul retakes wartime operational control of its forces from Washington, a South Korean general is supposed to command the CFC.

The defense chiefs also approved the plan to relocate the CFC headquarters to Camp Humphreys, a sprawling U.S. military complex in Pyeongtaek, 70 kilometers south of Seoul.

The allies had initially planned to keep the headquarters in Seoul at the defense ministry compound.

But the U.S. military has reportedly proposed relocating the headquarters to Camp Humphreys, where the U.S. Forces Korea and the U.N. Command are located, citing operational efficiency.

"(The two sides) have shared the understanding that this (relocation) measure will enhance the operational efficiency of the CFC and a combined readiness posture," the ministry said.

To flesh out detailed procedures for the CFC relocation, the two sides agreed to run a joint working group.

In addition, they agreed to beef up cooperation over preparations for a combined command post exercise that will replace the summertime Ulchi Freedom Guardian as part of a reorganization of major exercises aimed at supporting peace efforts with the North.

The allies have sought to stage the exercise in August during which they will test Seoul's initial operational capability (IOC) in a first step to verify whether Seoul is on course to meet the conditions required for the OPCON transition.

"While taking note of considerable progress in fulfilling the conditions for the OPCON transfer, the defense chiefs expressed expectation for the results of the future command's IOC verification," the ministry said.

"Especially, they shared the view that the OPCON transition should proceed in a direction that further strengthens the South Korea-U.S. alliance," it added.

At the start of the meeting, Shanahan called on the North to engage "productively" in nuclear talks.

Seoul and Washington have been striving to create fresh momentum for the resumption of negotiations with Pyongyang, which have been stalled since the no-deal summit between U.S. President Donald Trump and North Korean leader Kim Jong-un in Hanoi in February.

"As always, we're hopeful that the North Koreans will engage productively through diplomatic channels to resolve our concerns," he said.

Shanahan reiterated Washington's will to stick to sanctions until Pyongyang fulfills its "international obligations."

"We stand united, firmly committed to the enforcement of all United Nations sanctions against North Korea until they comply with the international obligations," Shanahan said.

"The only acceptable end-state is complete, verifiable denuclearization of the peninsula. Our alliance and the international community will not seek a lesser solution," he added.

Commenting on the efforts for the OPCON transfer, Shanahan pointed to the "apparent, tremendous strides" that the allied forces have been taking for the transfer.

"When I think of an alliance, the word that comes to mind is trust, incredible trust between our countries forged in combat nearly 70 years ago. That trust endures this day," he said.

"This is also apparent, tremendous strides that the (allies') CFC is taking to more rapidly fulfill conditions for the transition of wartime operational control from the U.S. commander to a South Korean commander," he added.

Monday's meeting between them was the second one following their first in Washington in April. A day earlier, they held trilateral talks with Japanese Defense Minister Takeshi Iwaya on the sidelines of a regional security forum in Singapore.