SEOUL, June 3 (Yonhap) -- The head of South Korea's central bank said Monday that the global community should work together to resolve recent trade tensions that are crippling the global economy while stressing the need for structural reforms for a further economic expansion.

"Over the past three decades, both advanced and emerging market economies have enjoyed the fruits of economic growth from greater global linkages. Many people in emerging countries have been able to escape from poverty as a result. However, new challenges have surfaced as well," Bank of Korea Gov. Lee Ju-yeol said in an opening speech, marking the start of an international conference hosted here by the central bank.

With global value chains growing wider and deeper, the interdependence of business cycles in advanced and emerging economies has grown through trade linkages, he said during the conference, titled "Global Economic Linkages: Impacts and Policy Implications." 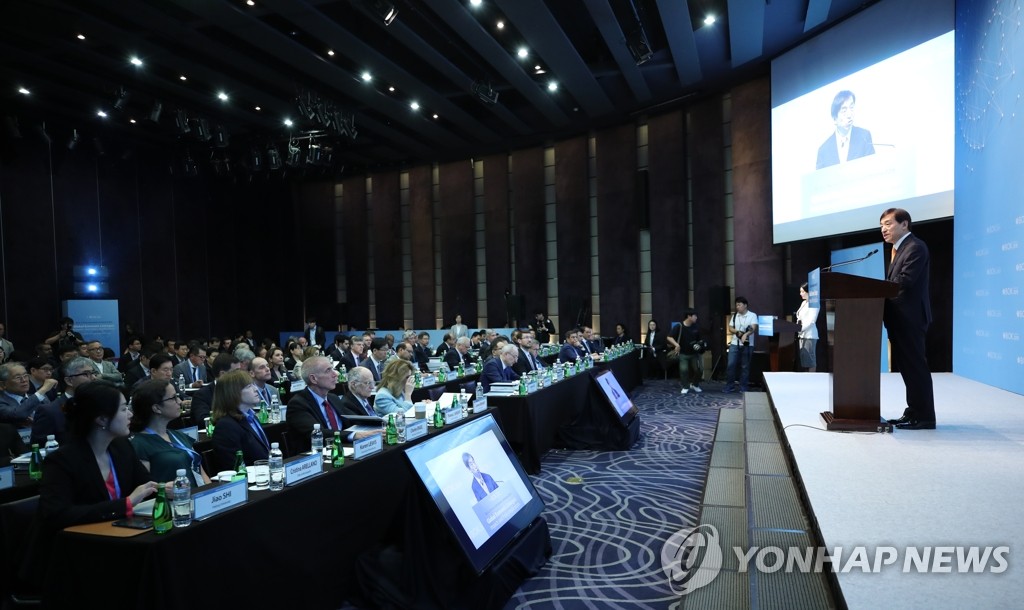 Lee's remarks come amid the escalating trade tension between the world's two largest economies -- the United States and China -- that is already seen to be taking a toll on the South Korean economy.

The U.S. and China are the world's two largest importers of South Korean products.

"To prevent the recent trade tensions from damaging this channel, the global community needs to resolve them as soon as possible," Lee said.

The BOK chief said the new challenges, among others, also include greater impacts that external factors may have on local economies.

Increased global competition has inevitably created winners and losers, even at local levels, according to Lee.

To reap the benefits of global linkages while reducing related harms, Lee stressed the need to first "heighten the resilience of the domestic economy to external shocks."

"To this end, it is essential to pursue structural reforms steadily, thereby boosting our potential for growth and job creation and improving our economic fundamentals," he said.

He also highlighted the need to strengthen social safety nets for those left behind in areas of comparative disadvantage as to nurture "new winners."

"Global linkages have already become a vital channel through which not only products but also ideas, knowledge and innovation are exchanged and disseminated," he said.