UIJEONGBU, South Korea, June 3 (Yonhap) -- Gyeonggi Province, some of whose towns border North Korea, is endeavoring to guard against the possible influx of African swine fever (ASF) as the animal epidemic recently broke out in the North.

Last week, the North reported the outbreak of the disease at a farm in its northern Jagang Province bordering China to the World Organization for Animal Health (OIE).

Chances are low the infection spreads via wild pigs (from the North) to the towns as a double row of barbed-wire fences are installed between the two Koreas, and yet infected carcasses may drift to the areas via the Imjin and Han rivers or the West Sea, the official said.

Blood tests for ASF that were conducted on some 420 pigs at 62 border farms after the outbreak in China and Vietnam hit the newsstands in August were negative.

Following the outbreak in the North, the agriculture ministry also conducted blood tests on some 2 million pigs at 1,300 farms across the province, with its results expected to come around Tuesday.

Steps to prevent the disease from entering the province via airports or ports have also been taken as some 960 foreigners are working at the pig farms.

Earlier in the day, Prime Minister Lee Nak-yon instructed the highest-level quarantine posture against the disease, saying it is highly likely the infection is currently spreading swiftly south in the North.

Lee also ordered the unification ministry to actively seek cooperation with the North on ways to wipe out the disease. .

Although African swine fever is not harmful to people, its fatality rate is 100 percent to pigs, with no cure currently available. 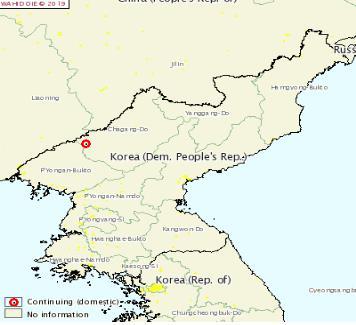