Ban and ranking officials from South Korea's environment-related agencies will be in Hangzhou, eastern China, on Tuesday and Wednesday for a meeting with China's environment minister and other officials, it said. 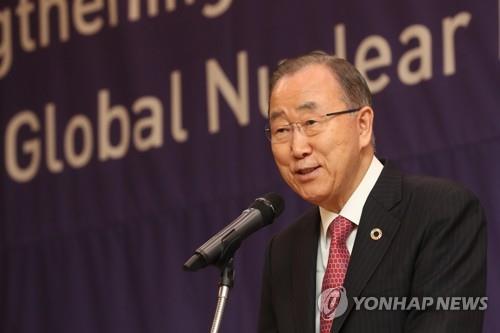 The South Korean officials were invited by China's Minister of Ecology and Environment Li Ganjie to attend the annual general meeting of the China Council for International Cooperation on Environment and Development (CCICED) and celebrations of 2019 World Environment Day, both scheduled to take place in Hangzhou this week.

Ban will also hold talks with Li and Che Jun, secretary of Zhejiang Provincial Committee of the Communist Party, to exchange views on fighting the fine dust pollution problem in the region.

In addition, Ban will meet with officials of the United Nations Environment Program in his capacity as chairman of the Global Green Growth Institute.

In late April, Ban took office as the inaugural chief of the National Council on Climate and Air Quality, a presidential advisory body launched to provide the government with policy recommendations on how to tackle fine dust pollution and explore ways to cooperate with neighboring countries.

South Korea designated fine dust as a social disaster in March as the intensity of the air pollution has increased in recent years. A large portion of the fine dust is believed to blow in from China.

Ban met with Chinese President Xi Jinping in April over the environmental pollution issue, while his council plans to hold a debate of 500 citizens in Seoul in June to discuss how to tackle the fine dust challenge and improve air quality.