SEOUL, June 3 (Yonhap) -- Kang Shin-myung, who served as commissioner general of the Korean National Police Agency (KNPA) during the administration of President Park Geun-hye, was indicted and referred to trial Monday on a charge of illegally intervening in elections.

The 55-year-old Kang, who held the top police post from August 2014 to August 2016, was charged with violating the election law, abuse of authority and interference with the exercise of rights, according to the Seoul Central Prosecutors' Office. 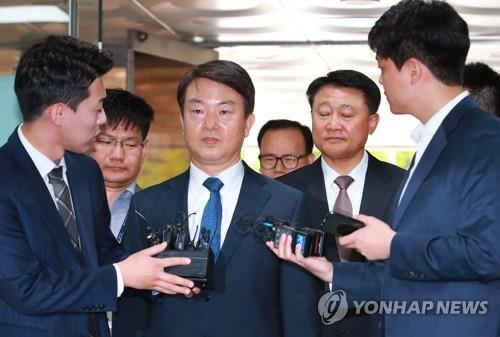 A Seoul court approved an arrest warrant for Kang on May 15 but dismissed prosecutors' request for pre-trial detention of Lee and others.

All of the former police and presidential officials are accused of campaigning for pro-Park candidates prior to the general elections in April 2016.

Kang is suspected of helping pro-Park politicians ahead of the then ruling party's nomination of parliamentary election candidates by utilizing police intelligence to disadvantage their party rivals.

Prosecutors said Kang and his subordinates at the KNPA's intelligence bureau had intensively collected intelligence on the movements of anti-Park politicians in 2016.

The Public Official Election Act bans the participation of civil servants in the planning and implementation of election campaigns.

In addition, Kang and Lee are accused of illegally collecting intelligence on liberal figures critical of the Park administration and the then ruling party while serving as the KNPA's Intelligence Bureau chief between 2012 and 2016, prosecutors said.

The KNPA's election-related intelligence gathered through the police's nationwide networks was reported to the presidential secretaries for political affairs at that time, they noted.

"Police officials were supposed to investigate election law violators, but the suspects had systematically campaigned for the interests of a specific political force," a prosecutor said.