The five carmakers -- Hyundai Motor Co., Kia Motors Corp., GM Korea Co., Renault Samsung Motors Corp. and SsangYong Motor Co. -- sold a combined 664,200 vehicles in May, down from 702,376 units a year ago, according to their respective data.

The companies blamed lower demand in major markets, such as China, for their lackluster sales results last month, while expressing concerns that the ongoing trade war between the United States and China will continue to weigh on their sales unless there is any breakthrough. 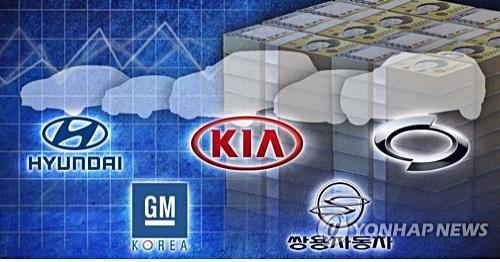 Hyundai and Kia, the country's two biggest carmakers, didn't report any significant rebound in sales last month due to low demand in China and emerging markets.

The two appear to badly need to bolster sales in China, the world's biggest automobile market, to achieve their sales target of 7.55 million vehicles for this year. From January to April, their sales in China plunged 18 percent to 286,346 autos from 347,927 during the same period a year earlier.

This year, Hyundai and Kia said they will put a bigger focus on boosting sales in the U.S. and China by launching SUV models.

In particular, Hyundai expects the flagship Palisade SUV and the all-new Sonata sedan, set to be launched in the U.S. later this year, to help buoy sales. Early this year, Kia began to sell the Telluride SUV, a model designed only for the North American market, in the U.S. It has received a strong response from local customers.

SsangYong Motor and Renault Samsung saw their on-year sales fall last month due to weak demand for their models. GM Korea posted a slight gain during the same period.

GM Korea's sales gained 0.4 percent to 41,060 from 40,879, helped by increased sales of the Trax compact and Equinox midsize SUVs.

SsangYong's sales fell 6.2 percent on weak exports. Renault Samsung suffered a 12 percent decline due to a lack of new models and an extended labor dispute. A monthslong dispute with its union over wages and working hours has already caused production losses equivalent to over 14,000 vehicles.

May auto sales down 5.4 pct on weak overseas demand

May auto sales down 5.4 pct on weak overseas demand