SEOUL, June 3 (Yonhap) -- South Korean President Moon Jae-in and the visiting Pentagon chief agreed Monday that it's important to maintain a robust alliance between the two nations and sanctions on North Korea, as Pyongyang refuses to take further denuclearization steps.

In a meeting with acting U.S. Secretary of Defense Patrick Shanahan at Cheong Wa Dae, Moon said, "In order to achieve the complete denuclearization of the Korean Peninsula through dialogue and permanent peace, the South Korea-U.S. alliance is more important than any other thing."

He expressed hope that the U.S. will support the peace process on the basis of a strong alliance, according to Cheong Wa Dae spokesperson Ko Min-jung.

Shanahan was quoted as saying that the South Korea-U.S. combined defense posture is contributing to the creation of the "diplomatic room" necessary for a peaceful resolution to the Korean Peninsula issue. 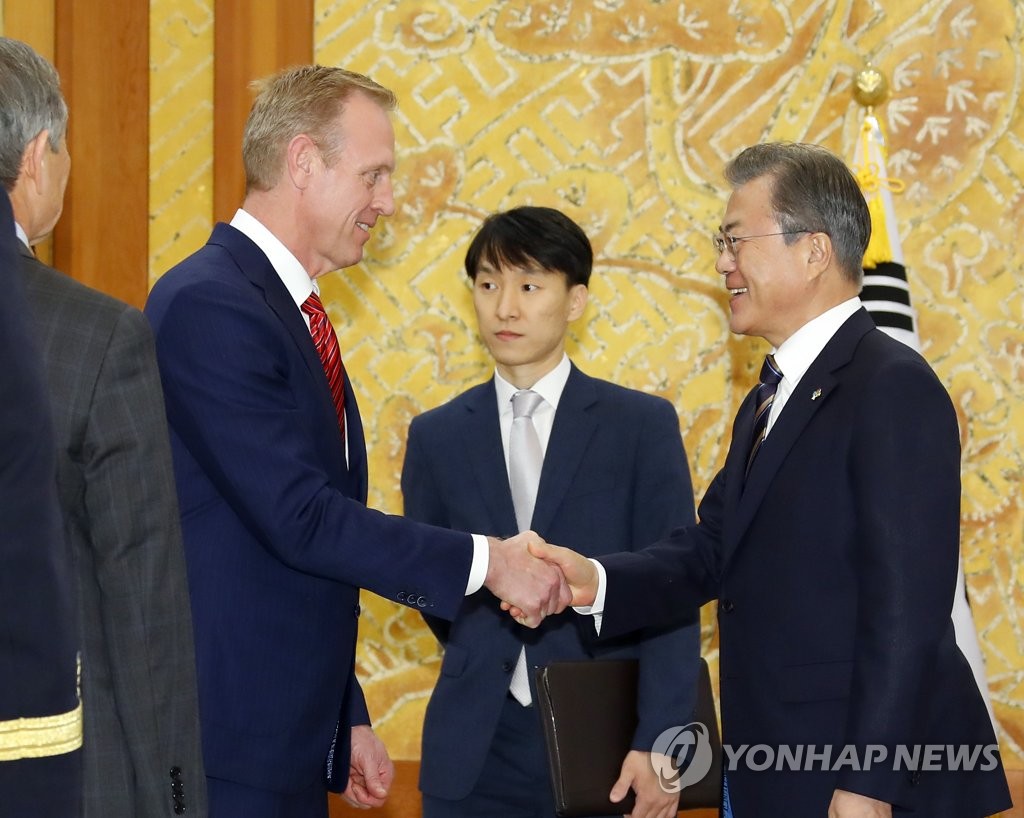 They also agreed that sanctions against Pyongyang should remain in place "until there is meaningful progress in achieving the denuclearization goal," she added.

Moon also underlined the need for humanitarian projects for the impoverished communist nation, including reunions of separated families and provision of food aid.

He pledged to coordinate closely with the U.S. government for such programs.

Their meeting, which lasted more than half an hour, was joined by U.S. Forces Korea Commander Gen. Robert Abrams and David Helvey, who serves as the principal deputy assistant secretary of defense for Indo-Pacific security affairs.

It marked Shanahan's first visit to South Korea as the leader of the Pentagon.

In early May, President Donald Trump announced his intention to nominate Shanahan, a former Boeing executive, as the secretary of defense, a post that requires Senate confirmation.