SEOUL, June 5 (Yonhap) -- A Seoul court on Wednesday issued an arrest warrant for a Samsung Electronics executive charged with ordering the destruction of evidence about suspected accounting fraud at the company's biotech affiliates.

The suspect, a Samsung Electronics senior executive vice president named Lee and in charge of finance, is accused of deciding at a company meeting on May 5, 2018, to manipulate and destroy accounting data and internal documents of contract drug manufacturer Samsung BioLogic and its affiliate, Samsung Bioepis, which were both implicated in an accounting scandal.

Another senior executive vice president named Ahn and in charge of business support operations was released after a request for his arrest was rejected. Ahn was also at the meeting in May. 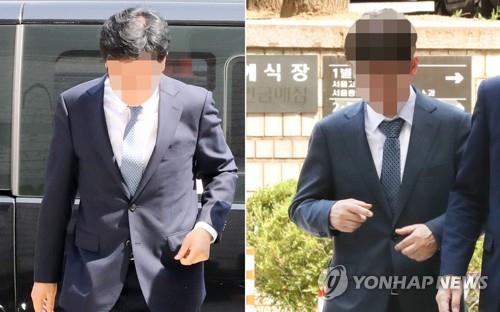 Judge Myeong Jae-kwon of the Seoul Central District Court approved pre-trial detention of Lee, saying suspicions of his crimes have been validated and there is concern he might try to destroy evidence.

"The charges have been largely validated and the case is grave, and given the suspect's standing and the results of the investigation so far, there is concern (he will) destroy evidence," the judge said.

On deciding to release Ahn, the judge said it was "difficult to recognize" the need to arrest him at present based on the circumstances of his involvement in the suspected crime, the level of his involvement, relevant evidence and his living arrangements and family ties.

Prosecutors have suspected that window dressing was committed in 2015 to inflate the valuation of Samsung BioLogics ahead of its initial public offering in 2016.

Prosecutors said Ahn and Lee convened the May 5 meeting after the Financial Supervisory Service notified Samsung BioLogics and Samsung Bioepis of their suspected window dressing.

The two Samsung executives are suspected of having since masterminded the entire process of evidence destruction and manipulation at the two biotech companies.

Samsung Electronics is believed to be functioning as a control tower for other Samsung Group companies.

In May, two other senior executive vice presidents of Samsung Electronics and two lower-ranking executives of the company, who hold the title of senior vice president, were arrested on the same charges.

In addition, a Samsung Bioepis executive was arrested and indicted last month for ordering his subordinates to delete about 2,100 computer files, including those containing words and initials referring to Samsung Electronics Vice Chairman Lee Jae-yong.

Prosecutors also requested an arrest warrant for Samsung BioLogics CEO Kim Tae-han in late May but the Seoul court rejected it.

Prosecution investigators found a computer server and tens of notebooks concealed under the floor of Samsung BioLogics' plant in Incheon, west of Seoul, in a recent raid.

Prosecutors are expected to summon Chung Hyun-ho, president of Samsung Electronics, as the court approved the arrest warrant for Lee. Chung is known as one of the closest aides to Lee Jae-yong.

Civic groups claimed the alleged window dressing was intended to enhance Lee Jae-yong's control of Samsung Group by seeking to inflate Cheil Industries Inc.'s stake in Samsung BioLogics ahead of Cheil's merger with Samsung C&T Corp. in 2015. Lee was the largest shareholder in Cheil Industries. It means a rise in the valuation of Samsung BioLogics has benefited Lee in his efforts to overhaul Samsung Group's governance structure.

Samsung BioLogics has claimed that the change of accounting methods and the revaluation of Samsung Bioepis in 2015 were in line with international accounting standards.