GONGJU, South Korea, June 4 (Yonhap) -- Three people were killed in a traffic accident caused by a mentally-ill man who drove in the wrong direction on an expressway on Tuesday, police said.

The accident took place on the Dangjin-Daejeon Expressway located south of Seoul at 7:34 a.m., when the 40-year-old light truck driver, surnamed Park, drove in the wrong direction and collided with a sedan.

Park and his three-year-old son and the 29-year-old driver of the sedan, surnamed Choi, were immediately rushed to a hospital where they were pronounced dead.

Park's wife reported his absence to the police at 7:26 a.m, right after she noticed her husband and son were missing.

"My husband has schizophrenia, and is dangerous as he hasn't been taking his medication recently," she was quoted as saying. 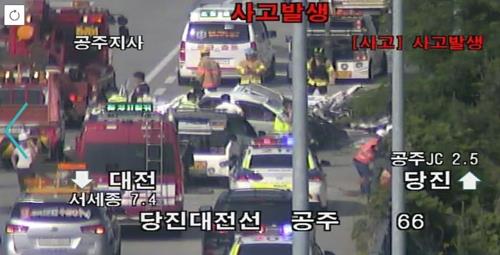