SEOUL, June 4 (Yonhap) -- Former Vice Justice Minister Kim Hak-ui was indicted and referred to trial Tuesday on charges of receiving bribes and sexual favors worth 170 million won (US$143,700) from a construction contractor.

A special team of prosecutors, winding up months of a probe into Kim's suspected sexual assault a decade ago, announced the indictment of the 63-year-old who briefly held the No. 2 post at the Ministry of Justice in 2013.

Kim is accused of receiving bribes and sexual favors worth 130 million won between January 2007 and February 2008, including money and valuables worth 31 million won, from a construction contractor named Yoon Jung-cheon. 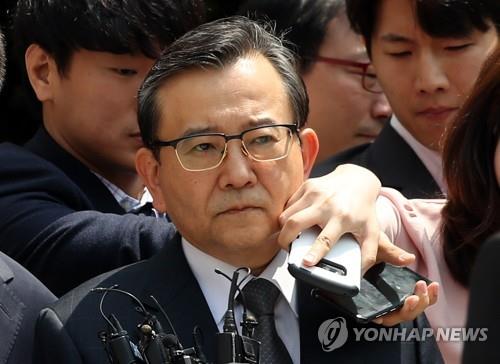 Prosecutors said Kim pressured Yoon to give up a debt of 100 million won from a woman surnamed Lee, who allegedly offered sexual services to the former vice minister. They applied third-party bribery charges to the 100 million won because the money was not directly paid to Kim.

In addition, the former vice minister was charged with accepting 39.5 million won from a businessman surnamed Choi between August 2003 and May 2011.

Yoon, 58 years old, was also indicted on charges of raping Lee in November 2007 and forcing her to have sex with Kim and other influential figures.

In 2013 and 2014, Kim was probed by the prosecution and police over various suspicions but was cleared of all charges due to lack of evidence. The special team of prosecutors resumed the probe in March this year following an instruction from President Moon Jae-in.

Kim's sex scandal became publicly known after a video clip was leaked showing a group of men, including one believed to be Kim, having a sex party with about 30 women in a remote villa owned by Yoon.

In a related move, the Special Committee on Past Wrongdoings by Prosecution, set up under the justice ministry, recently requested an investigation into Kwak Sang-do, former presidential secretary for civil affairs and now an opposition lawmaker, on suspicion of abusing his power to force police to cover up Kim's scandal.

But the special team cleared Kwak of the suspicion, saying it didn't find any suspected attempt by police, prosecutors or the presidential office to cover up Kim's scandal in the 2013-2014 period.

The ministry's past wrongdoings committee has also demanded an investigation into former Prosecutor General Han Sang-dae; Yoon Gap-geun, former chief of the Daegu High Prosecutors Office; and another former ranking prosecutor on suspicion of covering up many criminal cases involving contractor Yoon.

But the special investigation team dismissed the request saying it didn't find any clues to launching a formal probe into the former top prosecutors.