SEOUL, June 4 (Yonhap) -- The envisioned relocation of the Combined Forces Command headquarters between South Korea and the United States south of Seoul will not affect the allies' readiness posture, the defense ministry said Tuesday.

Though the allies had initially planned to keep the headquarters in Seoul at the defense ministry compound, the U.S. military has reportedly proposed moving it to Camp Humphreys, where the U.S. Forces Korea and the U.N. Command are located, citing operational efficiency.

"(The relocation of the CFC headquarters to Pyeongtaek) does not affect the Korea-U.S. combined readiness posture," defense ministry spokesperson Choi Hyun-soo told a regular briefing.

Some critics have raised concerns over the plan, claiming that the relocation to a rear area further south from the inter-Korean border could result in ending the "tripwire" role the frontline U.S. troops have played against North Korean aggression.

"In future warfare, geographical distance does not carry significance ... and the combined posture has been well confirmed through the C4I system capacity building and video conferences," she noted, citing the system for command, control, communications, computers and intelligence.

"The U.S. has reaffirmed its ironclad security commitment to South Korea, and the militaries of the two nations have done their best to secure the safety and security of the people," Choi noted.

In order to flesh out detailed procedures for the CFC relocation, the two sides agreed to run a joint working group, according to the Seoul ministry.

The relocation of the combined command is in line with a broader scheme to move U.S. military bases in Seoul and north of the capital to Pyeongtaek. The Seoul government plans to turn the vast swathe of land into a family park. 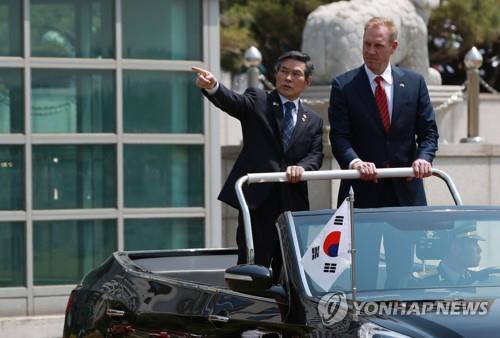