SEOUL, June 5 (Yonhap) -- South Korea's foreign reserves slightly fell in May due partly to the strengthening of the U.S. dollar, the central bank said Wednesday.

The country's foreign exchange reserves came to US$401.97 billion as of end-May, down $2.06 billion from a month earlier, according to the Bank of Korea (BOK).

The May drop slightly increased from a $1.22 billion decline in April. Still, the amount held by the country marked the world's ninth-largest, the bank said.

"The drop is largely attributed to the depreciation of other currencies against the U.S. dollar," BOK said in a press release.

Foreign securities, including government bonds and corporate debts, came to $375.79 billion at the end of last month, up $1.63 billion from the month before.

The country's reserve position at the IMF came to $2.50 billion, down $10 million.

Its holdings in gold bullion remained unchanged at $4.79 billion. 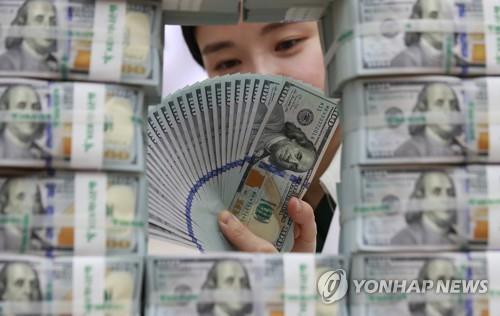 S. Korea's foreign reserves edge down in May

S. Korea's foreign reserves edge down in May