WASHINGTON, June 4 (Yonhap) -- U.S. Special Representative for North Korea Stephen Biegun gave his first public speech in nearly three months on Tuesday, but requested it be off the record in apparent consideration of sensitive nuclear negotiations with Pyongyang.

Biegun arrived at the Korea Economic Institute of America some 20 minutes behind schedule to a flurry of questions from reporters hoping to get a few words out of him.

His speech, titled "Security and Unification Issues on the Korean Peninsula," was part of day-long forum on security challenges facing the peninsula and the prospects for peace.

The envoy, who had just returned from a security forum in Singapore, beamed and replied that the Shangri-La Dialogue had been "lovely" but refused to comment on the current state of negotiations with North Korea or reports of the regime's execution of his counterpart, Kim Hyok-chol. 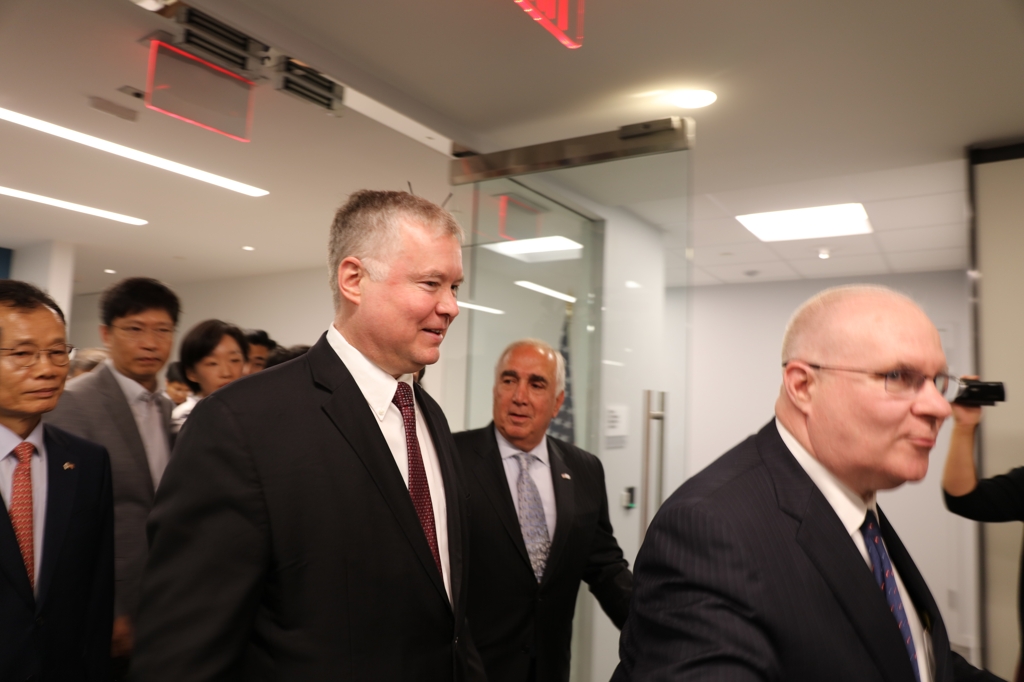 The U.S. and North Korea have entered into a protracted stalemate after their second summit in Vietnam in February ended without a deal.

The breakdown was attributed to a gap between U.S. demands for North Korea's complete denuclearization and the North's demand for sanctions relief.

U.S. President Donald Trump has still appeared hopeful for a deal and downplayed North Korea's short-range missile launches in May as a possible attempt to "get attention."

And undercutting his National Security Adviser John Bolton, who condemned the launches as a violation of U.N. Security Council resolutions, Trump has also said he views them "differently."

The last time the U.S. envoy spoke publicly was at a conference hosted by the Carnegie Endowment for International Peace on March 11.

His speech on Tuesday was not originally announced to be off the record, but organizers informed guests last week that it would be so following a "quick message" from the special representative.

Since the no-deal summit, North Korea has stepped up calls on the U.S. to ease its hard-line stance against removing sanctions and twice launched missiles and projectiles in apparent protest.

The second launch on May 9 occurred while Biegun was in Seoul for meetings with South Korean officials, and the envoy canceled all planned press availabilities there.