(ATTN: UPDATES with comments by finance minister in paras 12, 23)
By Kim Kwang-tae

SEJONG, June 5 (Yonhap) -- South Korea on Wednesday decided to alter the tax system on beer for the first time in half a century in a move to address imbalances in taxes between imported and domestic beer, the finance ministry said.

The change -- the first since 1968 -- calls for a tax system based on amount rather than an ad valorem, a charge levied on prices of beer, according to the Ministry of Economy and Finance.

Currently, South Korea imposes a 72-percent liquor tax on beer. But the tax base for domestic beer includes manufacturing costs, profit as well as selling, general and administrative expenses.

In contrast, for imported beer, the tax base is only import prices, which do not include any other costs.

The imbalances have led to an increased share of imported beers in South Korea in recent years. Imported beers are estimated to have accounted for 20.2 percent in the local beer market in 2018, up from 8.5 percent in 2015.

Under the change, South Korea will uniformly levy 830.3 won in tax for a liter for either local or imported beer while collecting liquor tax of 41.7 won per liter of "makgeolli," a Korean rice brew.

The ministry said prices of imported beers are unlikely to go up due to fierce competition in South Korea. 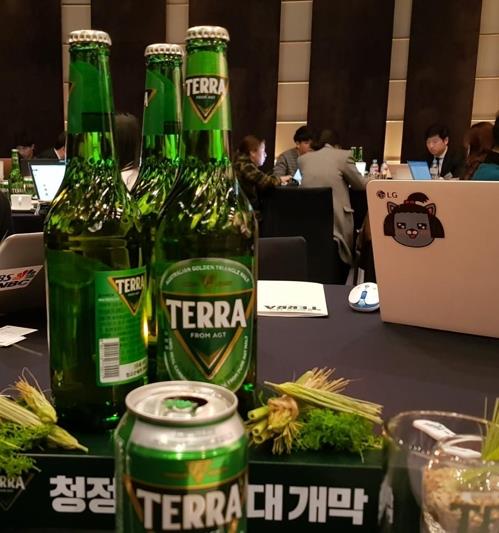 The change could lead to the resumption of domestic production of some foreign brand beers in South Korea.

"We expect increased beer production in South Korea to create jobs in related industries and lead to new facility investments," Hong Nam-ki, the minister of economy and finance, said in a meeting with key officials of the ruling Democratic Party.

Oriental Brewery had produced canned Budweiser and Hoegaarden in South Korea before shifting to import of the two beers from the U.S. and Belgium, respectively, in 2017.

"We will consider producing canned Budweiser and Hoegaarden in South Korea again if the liquor tax is changed," Baek Joo-hwan, a spokesman for Oriental Brewery, said.

The ministry said it will reflect the change in its revision to liquor tax and submit it to parliament for approval.

HiteJinro and Lotte Liquor, which imports beers, said they have no plan to produce foreign brand beers in South Korea.

Also Wednesday, the government decided to extend a temporary tax cut on purchases of passenger cars in the latest move to boost domestic consumption.

The government slashed a special excise tax on purchases of passenger cars by 30 percent to 3.5 percent between July and December in 2018, boosting sales of local passenger cars by 2.2 percent on average during the period.

In January, the government extended the scheme until the end of June.

The latest tax cut is set to begin in July and expire at the end of December this year.

Hong said the extension could boost domestic consumption and the auto industry.