SEOUL, June 5 (Yonhap) -- South Korea's drug safety chief apologized for the government's handling of the cancelled gene therapy drug Invossa on Wednesday and said talks are underway with the producer to compensate patients who took the drug in case they suffer side effects.

In a press conference held in Seoul, Minister of Food and Drug Safety Lee Eui-kyung acknowledged that there were problems in the authorization and checkup related to Invossa.

Kolon Life Science, the producer of the joint pain treatment medication, has till June 14 to submit a plan to keep tabs on all people who took Invossa.

Lee said that in the event of side effects, the government and Kolon will come up with ways to provide compensation. There have been no reported cases of side effects associated with Invossa, according to the drug authorities.

South Korea's drug regulator canceled its license for Invossa last month after a probe revealed that Kolon mislabeled and falsely reported an ingredient that was used.

Authorities said the mislabeling started in 2003 with the drugmaker also accused of failing to disclose additional data it discovered on the problem before submitting Invossa for approval.

It, moreover, failed to provide a scientific reason for the mix-up.

The distribution of the drug that received formal approval for sale in the domestic market in July 2017 has been suspended since April this year.

A total of 438 South Korean hospitals and clinics have administered 3,707 shots of the drug before treatment was halted.

Invossa is the world's first gene therapy drug for osteoarthritis, a joint disorder that affects many elderly people, with patient numbers in South Korea alone estimated to be around 5 million.

Before the incident, the drug was hailed as a success for South Korea's biopharma business that had lagged behind foreign rivals. 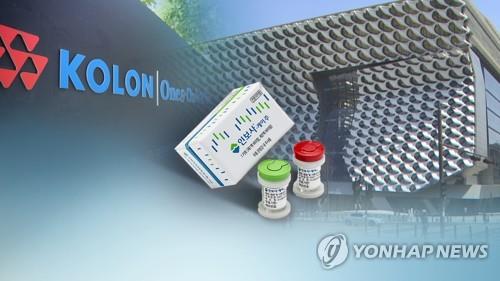