With the additions, the number of King Sejong Institutes, a public institution run by the Ministry of Culture, Sports and Tourism to promote Korean language education and the distribution of Korean culture abroad, has increased to 180 in 60 countries worldwide, according to the ministry. 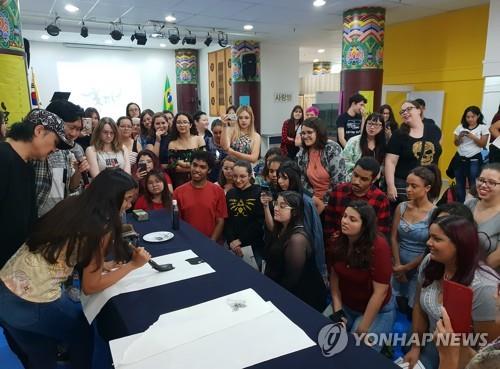 The 13 new institutes were chosen from among 53 applicants in 31 countries, mostly national or state universities with courses in the Korean language, it said.

The institute will be introduced for the first time to four of the 11 host countries -- Laos, Serbia, El Salvador and Turkmenistan, it added.

Named after the Joseon Dynasty (1392-1910) king who invented the Korean alphabet, "hangeul," the institutes were first launched in three countries in 2007.

"Recently, Korean culture has shown remarkable achievements, including BTS' domination of Billboard charts and the Korean film 'Parasite' winning the top prize at the Cannes Film Festival," a ministry official said. "We'll do our best to ensure the global interest in Korea will lead to greater enthusiasm for the Korean language and culture."

Number of King Sejong Institutes to rise by 13 to 180

Number of King Sejong Institutes to rise by 13 to 180