Under the 55-billion won (US$46.58 million) project launched in June, 2015, the Defense Acquisition Program Administration (DAPA) and Hanwha Defense Co. developed the anti-aircraft gun wheeled vehicle system, and final tests and evaluations proved that it met all the military requirements.

As a system designed to ward off low-altitude attacks by enemy aircraft, the new weapon has an effective range of 3 kilometers, some 1.6 times longer than the 20mm Vulcan anti-aircraft guns, and its latest targeting systems allow it to have automatic tracking and self-targeting capabilities, according to the DAPA.

The adoption of the wheeled platform also enabled it to provide active mobile and localized support for troops, it added.

Five major local defense companies, including Hanwha, as well as 200 small firms, participated in the project, and some 95 percent of the system was made with indigenous technologies, Park noted. 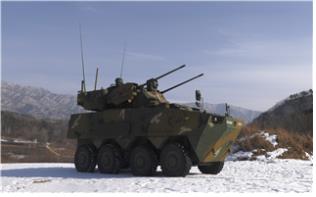