"BTS World," a simulation game built around the idea of grooming BTS members to become global superstars, will be released worldwide, excluding China, for Google's Android and Apple's iOS devices on June 26, Netmarble said in a press release.

Players will be given numerous missions, selecting a BTS member card to complete the mission and progress through the game, company officials said.

After the game's official launch, BTS is planning to use the platform to release a new song, including the game's new theme, sung by Jin, Jimin and Jungkook of BTS.

Pre-registration for the mobile game is currently available on the official website. Netmarble said it also features a mini game that pairs players with the BTS member they match the best.

Netmarble, established in 2000, has produced some of the most successful mobile and online games, including mega-hit title "Lineage 2: Revolution," "MARVEL Future Fight" and "Seven Knights." 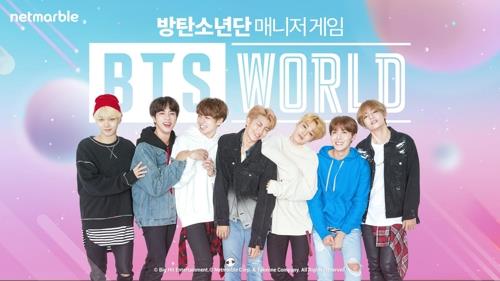