David Yoon, who was dubbed the "steward" of the Choi family for helping Choi and her daughter, Chung Yu-ra, live in Germany, was arrested in a Dutch city early this month and Seoul prosecutors are pushing for his extradition, the officials said.

Yoon, a German national, went missing after the Park corruption scandal involving Choi broke out in 2016, and South Korean prosecutors subsequently put him on Interpol's wanted list on bribery charges. 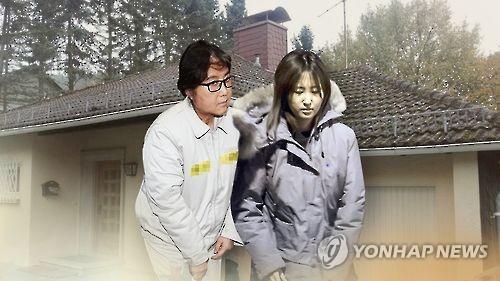 Yoon is accused of accepting bribes from a developer by promising to offer development favors in a southern Seoul district with the help of Park.

A man surnamed Han, who pocketed a bribe of 300 million won (US$254,000) in collusion with Yoon, was sentenced to three and a half years in prison and a fine of 150 million won in April.

Yoon was reportedly acquainted with Park, as he had served as an interpreter for the former president during her visit to Germany.

Prosecutors are pushing for Yoon's extradition, suspecting he was involved in various illegalities committed by Choi. But his repatriation could take a long time if he starts a lawsuit against his extradition in Europe.

Park and Choi received prison sentences of 25 years and 20 years, respectively, from a Seoul appellate court last August after being convicted of forcing South Korean conglomerates to donate huge sums to two foundations under the latter's control.