SEOUL, June 5 (Yonhap) -- President Moon Jae-in attended a symbolic ceremony to unveil a hydrogen bus in a southern town Wednesday, a move to demonstrate his administration's resolve to foster next-generation vehicles as a new growth engine.

Moon observed South Korea's first hydrogen-fueled bus for regular intra-city bus service, which will make its debut in Changwon, South Gyeongsang Province, on Thursday. He boarded the bus after participating in a World Environment Day event at Changwon Exhibition Convention Center (CECO) in the city located about 300 kilometers southeast of Seoul.

He had a trial ride in a hydrogen-powered Nexo taxi during a visit to Paris in October last year. He also inspected a hydrogen-charging station.

Earlier this year, Moon's office announced that it would strategically develop the next-generation car, non-memory chip and bio-health sectors as the nation's future economic growth engines. 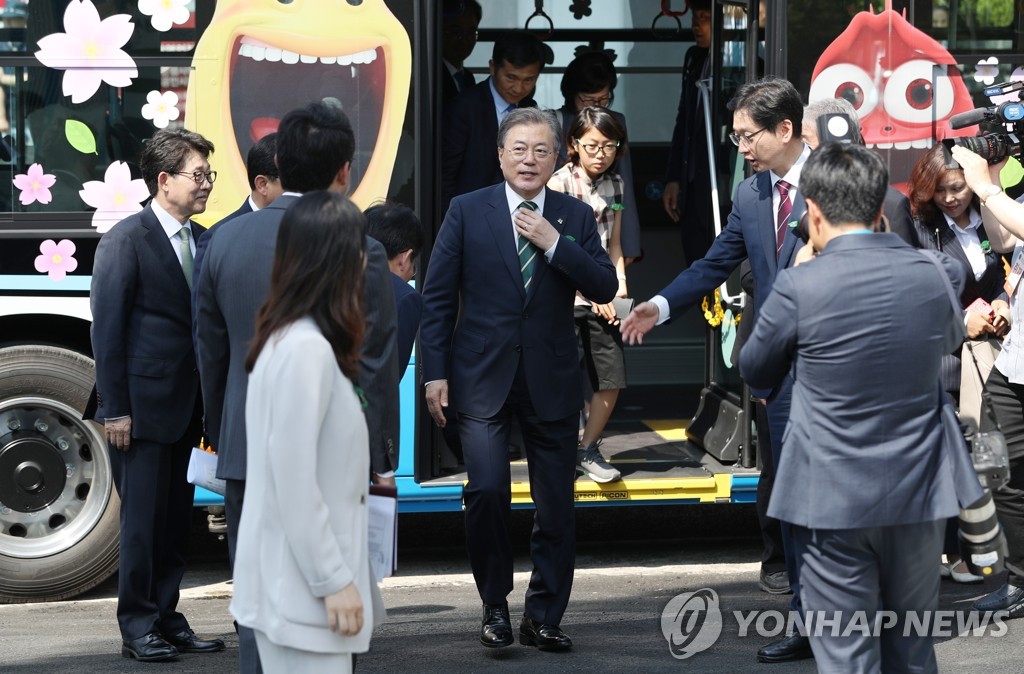 South Korea plans to run 35 hydrogen buses for residents in Changwon and six other cities -- Seoul, Busan, Ulsan, Gwangju, Asan and Seosan -- this year. It aims to produce a total of 1.8 million hydrogen cars and install 660 charging stations nationwide by 2030.

There will be 310 stations by 2022 under a joint project of the transportation, commerce and environment ministries. They plan to announce further details soon.

In a speech to commemorate World Environment Day, Moon, who took office in May 2017, said, "The past two years were a process to create a foundation necessary for the health and safety of the people, including a reduction in fine dust, the safe use of chemical materials and a response to climate change."

He stressed that it's the people's right to have clean air.

He added it will "phase out 1 million old diesel cars by 2021, while quickly expanding the supply of eco-friendly cars."