"Decisions made today regarding 5G networks will have national security implications for decades," U.S. Ambassador to South Korea Harry Harris said during a keynote speech at a conference held in Seoul.

His remarks came as the United States and China have been engaged in tit-for-tat actions in the past few weeks over trade and high-end technologies. More recently, their trade war appears to be boiling down to Huawei Technologies, which was added to the U.S.' blacklist last month, barring it from buying American-made components.

Washington has been pressing its allies to join its move to ban Huawei and boycott its products as there are security risks posed by the Chinese telecommunication firm.

LG Uplus Corp., South Korea's No. 3 carrier, is the only local company that is using Huawei's equipment in building its 5G base stations. Its bigger rivals, SK Telecom Co. and KT Corp., have signed deals with other vendors such as Samsung Electronics.

The envoy also said the countries should end data localization, saying that it stifles innovation and hurts the economy. Several countries, including China, have relevant laws that require data generated in the country to be stored within its border. 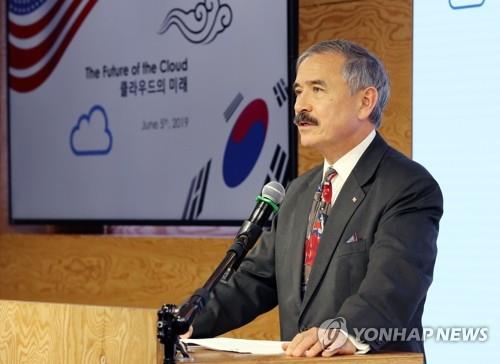