38 North, a project run by the Stimson Center think tank, said recent commercial satellite imagery shows the movement of vehicles, equipment and personnel near the uranium facility at Yongbyon.

"Our observation, that periodic material transport (e.g., possibly to deliver liquid nitrogen) has continued at the Uranium Enrichment Complex over time, provides a new indicator that the complex is operational, and therefore that it is also most likely producing enriched uranium," 38 North said on its website, citing satellite imagery from past months up to May 28.

"However, we do not have any definitive means to determine either the actual levels of enrichment or the total production throughput of the ~4000 centrifuges at this time," it added.

North Korea has built nuclear weapons from both plutonium and uranium, with some estimating that the regime now holds an arsenal of 20 to 30 nuclear weapons.

The report comes amid a stalemate in negotiations between Washington and Pyongyang aimed at dismantling the North's nuclear and ballistic missile programs in exchange for sanctions relief.

At the second U.S.-North Korea summit in February, North Korean leader Kim Jong-un offered to dismantle the Yongbyon facility in return for an easing of sanctions. But the meeting ended without a deal after the two sides failed to find common ground on the scope of denuclearization and sanctions relief.

In March, South Korea's National Intelligence Service was quoted by lawmakers as saying that the North's uranium enrichment facilities continued to operate normally and did so before the February summit as well. 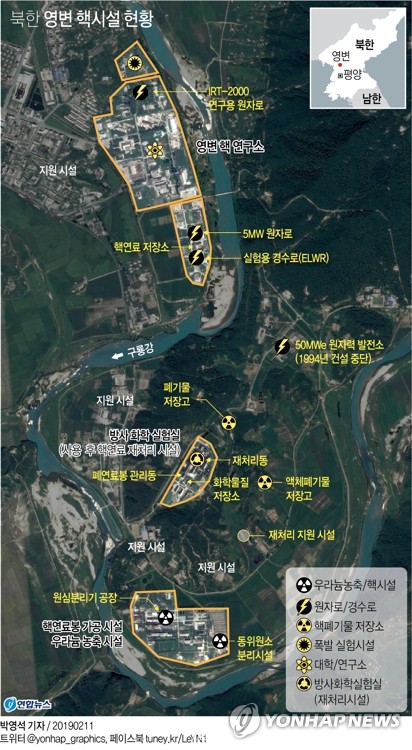