In his Memorial Day address at Seoul National Cemetery, which Moon described as a "site alive with patriotism," Moon said, "When it comes to patriotism, there is no difference between conservatives and liberals."

Love of country is a matter of caring about the "destiny of a national community," not vested rights or private gain, he said.

"Those engrossed in vested interests are not being true to either conservative or liberal causes," he added.

The president was apparently mindful of chronic ideological rifts among South Koreans, who have lived for seven decades on the southern side of the divided peninsula. 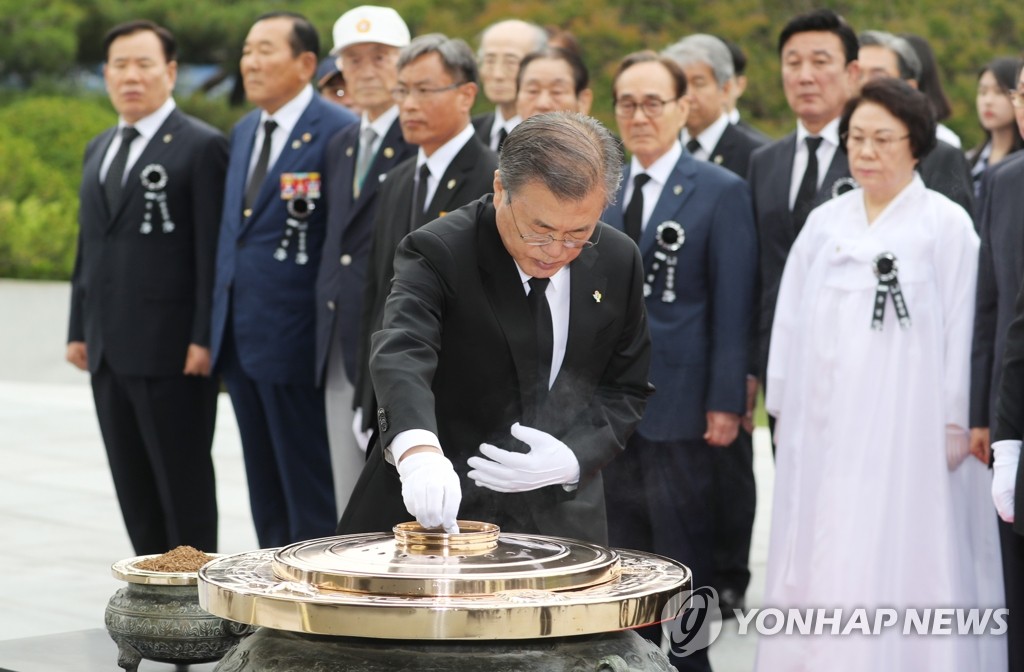 How to deal with the nuclear-armed communist North Korea is a major source of political wrangling.

Moon emphasized that democracy and economic development here are fruits of concerted efforts by conservatives and liberals alike.

He asked the people to avoid "extremes" and view patriotism within the boundary of common sense and knowledge for an integrated society.

"We pursue stability sometimes and change at other times. Some sectors choose stability and others opt for change," he said. "I respect all acts of patriotism regardless of whether they are from conservative or liberal quarters."

He noted that it's a duty of a state to remember the dedicated contributions of war veterans and other patriots "no matter what happens."

"Today, I ruminate on patriotism again here at the National Cemetery and pledge that every effort will be made to fulfill the duty of the nation for those who made sacrifices for the country and their families," he said.

Moon also talked about the alliance spirit of South Korea and the United States, pointing out that 2020 will mark the 70th anniversary of the outbreak of the Korean War.

"The United States endured the greatest sacrifice for the sake of our country's liberty and peace," he said. 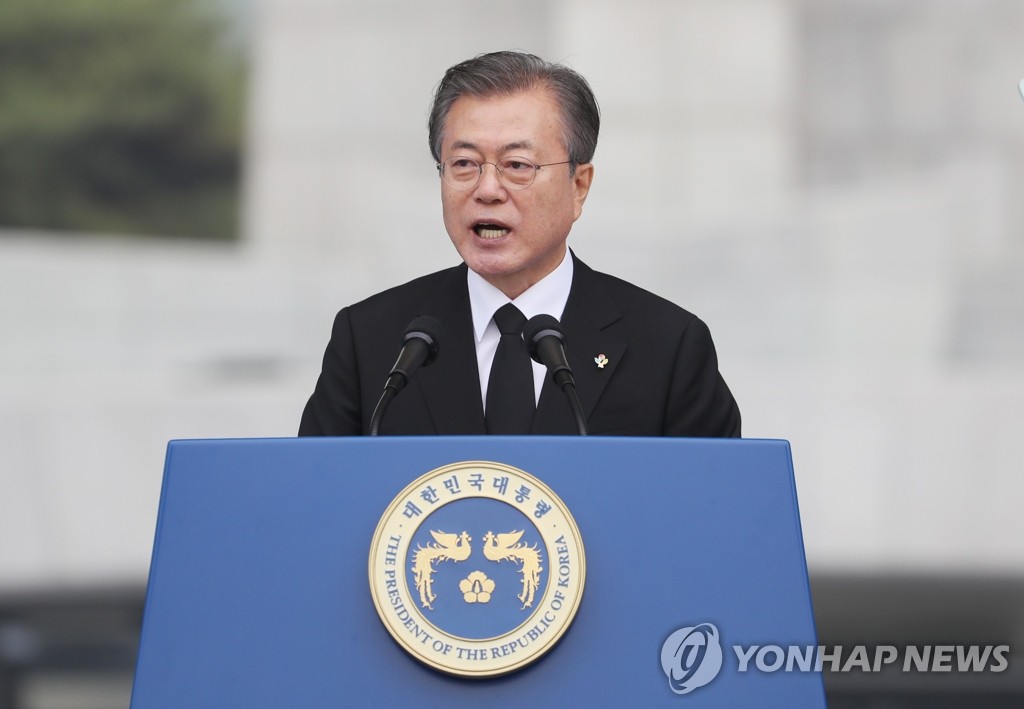 Under the U.N. flag, 22 nations dispatched 1.95 million troops to help South Korea fight against the invading North Korea during the three-year conflict. About 33,000 U.S. soldiers lost their lives, and 92,000 others were wounded.

"The government will build a 'Memorial Wall of Remembrance' within the Korean War Veterans Memorial in Washington D.C. by 2022," he said. "We will honor the noble sacrifices of each and every fallen U.S. Korean War veteran and help the sublime value of the alliance between Korea and the United States become deeply etched in the hearts of the people."

The president also mentioned a South Korean navy officer killed in an accident last month involving a destroyer. He was taking part in a ceremony on May 24 to return to the Jinhae naval base after a mission aboard the Choi Young destroyer of the Cheonghae Unit operating in the Gulf of Aden, when a big rope tying the ship to the dock snapped.

"Petty Officer First Class Choi Jong-geun could not return to the arms of his family in the end, and the government laid him to rest at the Daejeon National Cemetery," he said.

Some critics claimed Moon did not attend the funeral of the soldier either in ignorance of the military or in consideration of North Korea.